This Wednesday, April 6 at 7:00 p.m., Richard N. Juliani, PhD will be giving a presentation as part of the Alfred F. Mannella and Rose T. Lauria-Mannella Endowed Distinguished Speaker Series in Speakers’ Corner. This will be Dr. Juliani’s second featured talk for the series—he was the first official Mannella series speaker in 2009. Wednesday’s talk, “The Forgotten War: Little Italy in World War I,” will focus on Italy in the Great War, the American role on the Italian Front, and the participation of Philadelphia’s immigrants in the Italian army—particularly their role against the Austro-Hungarian Empire and Germany as members of the U.S. Army alongside the Allies on the Western Front. Little Italy, as Dr. Juliani will examine, was a distinctive homefront during the course of the war, and its role in the war has had long term consequences for the assimilation of Italians in Philadelphia and America at large. The event is free and open to the public.

Dr. Juliani is a retired Villanova University Sociology professor. He earned his BA at Notre Dame, his MA at Rutgers, and his PhD at the University of Pennsylvania. Before teaching at Villanova, Dr. Juliani taught at Arcadia University (still Beaver College at the time) and later, Temple University. He taught at Villanova for 34 years, where he received the Outstanding Faculty Research Award in 1999. He retired in 2011. Dr. Juliani is currently working on two new books on the Italian American experience during World War I and German Philadelphians during World War I.

To dig deeper into the works of Dr. Juliani, check out the resources below. 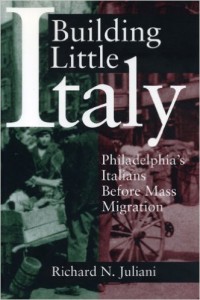 The Social Organization of Immigration: The Italians in Philadelphia