With the 2016 presidential race well underway, there is a great deal of excitement in the air about the candidates, the election process and the November results. Americans are paying close attention to mass media and social media sites to connect with the candidates and to stay on track during the race. Like political analysts, many of us have been scrutinizing both the verbal and non-verbal ways in which the candidates communicate. What have been your perceptions?

Falvey Memorial Library invites members of the Villanova Community to join us on Tuesday, March 29 at 10:00 a.m. in Speakers’ Corner to dissect and discuss these and other aspects of the presidential race with us. Several prominent Villanova scholars will present on various aspects of the 2016 United States presidential election. Billie Murray, PhD, Department of Communication, will respond to “Does Social Movement Rhetoric Matter in Elections?”; Heidi Rose, PhD, Department of Communication, will speak on “Style, Substance and the Performance of Presidential Candidates”; Camille Burge, PhD, Department of Political Science, will answer the question “How Might Emotions Shape the 2016 Election?” 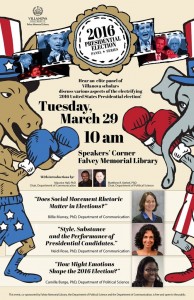 This event, co-sponsored by Falvey Memorial Library, the Department of Political Science and the Department of Communication, is free and open to the public. Members of the student group Wildcat P.A.C. will be hosting a table at the event to encourage attendees to register to vote as well! Be sure to join us on March 29 to be a part of the conversation about the 2016 U.S. presidential election!

See below for a list of links so that you can utilize Falvey’s resources to “dig deeper” into the 2016 Presidential Election race!

Get out the Vote:

Resources for this blog were selected by Merrill Stein. Stein is team leader of the Assessment team and liaison to the Department of Political Science.