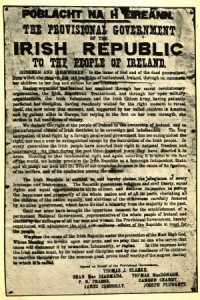 As Easter approaches, so too does the 100th anniversary of Ireland’s Easter Rising, which began on April 24th, 1916. Falvey’s Special Collections commemorates the 1916 Easter Rising with a physical exhibit located on the library’s 1st floor, as well as an online exhibit: To Strike for Freedom! 1916 Easter Rising. The exhibits include items from the Joseph McGarrity Collection. Joseph McGarrity was an Irish-American from Philadelphia, who immigrated to the United States in 1892 when he was 18. McGarrity was an active supporter of Irish independence and a leading member of the Clan-na-Gael, an Irish republican organization. McGarrity’s belief in Irish nationalism is strongly reflected in the items of the collection, which he donated to Villanova University. Falvey’s 1916 Easter Rising exhibit not only looks at the causes, details, and consequences of the Rising, but also reveals the important role Irish-American organizations played in supporting the Rising and Ireland’s fight for independence. 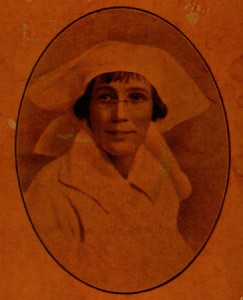 As I organized the online exhibit, I gained a deeper understanding of the important impact the Rising had on Ireland’s fight for independence. Also, I was surprised to discover the active part Irish women played in the Rising. Women’s important roles as nurses, soldiers, and couriers are explored in the online exhibits section: “Undying glory of Womanhood”. Of particular interest is In Times of Peril: Leaves from the Diary of Nurse Linda Kearns from Easter week, 1916, to Mountjoy, 1921 by Linda Kearns, which has been recently digitized and can be found in Villanova’s Digital Library along with many other resources detailing the events surrounding the 1916 Easter Rising.

I would like to thank Anna Fitzpatrick for providing research and text for the online exhibit. I would also like thank Craig Bailey, Ph.D., Laura Bang, and Michael Foight for additional curation and editing, as well as Joanne Quinn for designing the graphics.