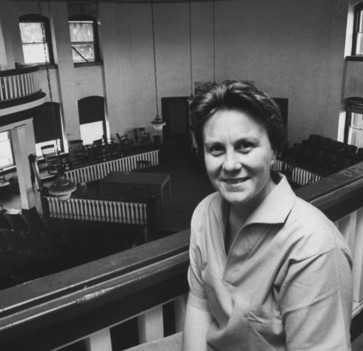 “I wanted you to see what real courage is, instead of getting the idea that courage is a man with a gun in his hand. It’s when you know you’re licked before you begin, but you begin anyway and see it through no matter what.”
– Atticus Finch, To Kill a Mockingbird

To one of the most courageous. Rest in peace, Nelle Harper Lee.

Nelle Harper Lee passed away Friday Feb. 19 in her hometown of Monroeville, Alabama. She is best known for her first novel to be published: To Kill a Mockingbird. Within two years of its release in 1960, Mockingbird became a bestseller, won a Pulitzer Prize, and was made into a popular motion picture.

Set in Maycomb, Alabama, Lee’s story uses six-year-old Jean Louise Finch (Scout)’s point of view to illustrate racial injustice in the mid-1930s. Scout is too innocent to fathom the hatred in some adults’ hearts; too naïve to comprehend her father’s decision to place his career, his life and his family’s safety at risk; and too young to appreciate her father’s remarkable courage in taking moral actions even when doing so means that he stands alone. Lee’s memorable depiction of life in the American South during the Great Depression will certainly be enjoyed by grateful readers for many years.

After her enormous success, Lee resumed her quiet life, away from the celebrity spotlight. Then, in 2015—more than 50 years after her rise to notoriety, Lee made international news both by publishing her second novel, Go Set a Watchman, and by the controversial circumstances surrounding its release. This news blog posted an article introducing Watchman and explaining its controversy. The blog posting includes links to resources for readers who want to “dig deeper.”