A Visit to Oman, the Switzerland of the Middle East 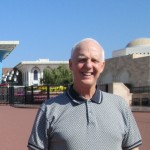 Ward Barnes is a long-time service desk supervisor at Falvey Memorial Library and resident of Radnor Township. If you have used the Library at night or on weekends, then you have probably seen or met Ward at the front desk. What follows is a travelogue of Ward’s recent trip to Oman, a region of the Middle East that he compares to Switzerland. Read more to find out why.

For many years the Nursing School at Villanova University had an arrangement with the nation of Oman to train some of its young nurses. One of these nursing students rented a room from me in 2008, and then through a web of connections and by word of mouth I met many more Omanis, including more Villanova students. A goodly number ended up staying at my house, some for many months and some for much shorter periods while vacationing in the U.S. In some cases I got to know the Omanis quite well, and in one instance over the last two years virtually adopted the family of one roomer, Saud Al Suleimani. He brought over his wife and five very cute and charming children, all under the age of 12, and moved from my house into a nearby apartment. I found all of my Omani acquaintances to be delightfully friendly, open and generous, and they kept beseeching me to come to their country. Thus it was that I finally responded to their invitation with a 9-day visit in early January. 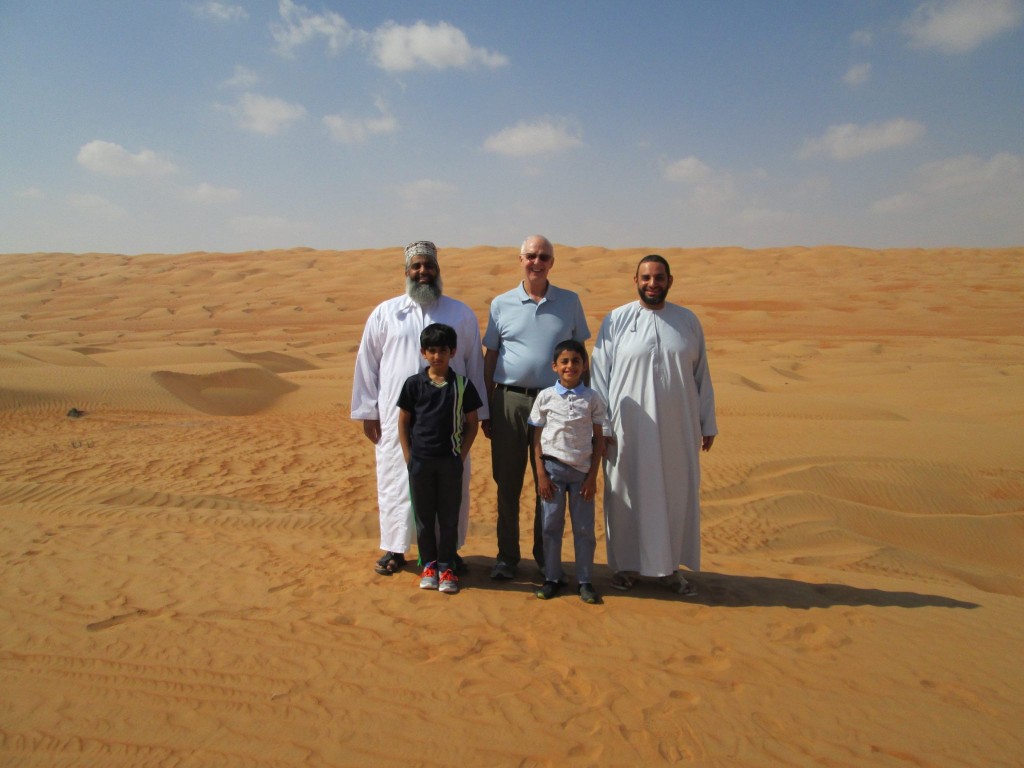 Standing in the middle of an Omani desert.

Those in the West who are at least vaguely aware of Oman probably think of this country located on the Arabian Peninsula south of Saudi Arabia, as a postage stamp-sized entity. Juxtaposed to some nearby states—Saudi Arabia, Egypt, or Iran—it does indeed seem small. But my trip though a sector of the northeast corner of the country, suggests that it is really quite sizable.  I travelled for many hours and on four or five days through mountains and deserts and along the seashore in a triangle from Muscat, the capital, to Nizwa in the interior, and to Sur on the coast 2 hours south of Muscat, and afterward noted on a map– to my amazement–that I had seen less than 3 or 4% of the country. When I looked up some square mileage figures later, I found that Oman is larger than Italy, more than twice the size of England, and bigger than Pennsylvania and New York combined.

That was one of just many things that surprised me. The modernity of Muscat and many other areas, where most of the buildings and roads and other infrastructure look– and are– less than twenty-five years old, was another revelation. I kept expecting to see the sorts of shabbiness and signs of poverty of a third-world place– camels and goats providing transportation and food, rocky or sandy rutted paths for roads, scrawny, hungry-looking children, beggars—but I looked in vain. Instead I saw modern highways (is Oman the only country that lights its highways every inch of the way at night?) thronged with cars, attractive, solid, stuccoed homes, and a sturdy, healthy looking and evidently quite prosperous people almost everywhere. 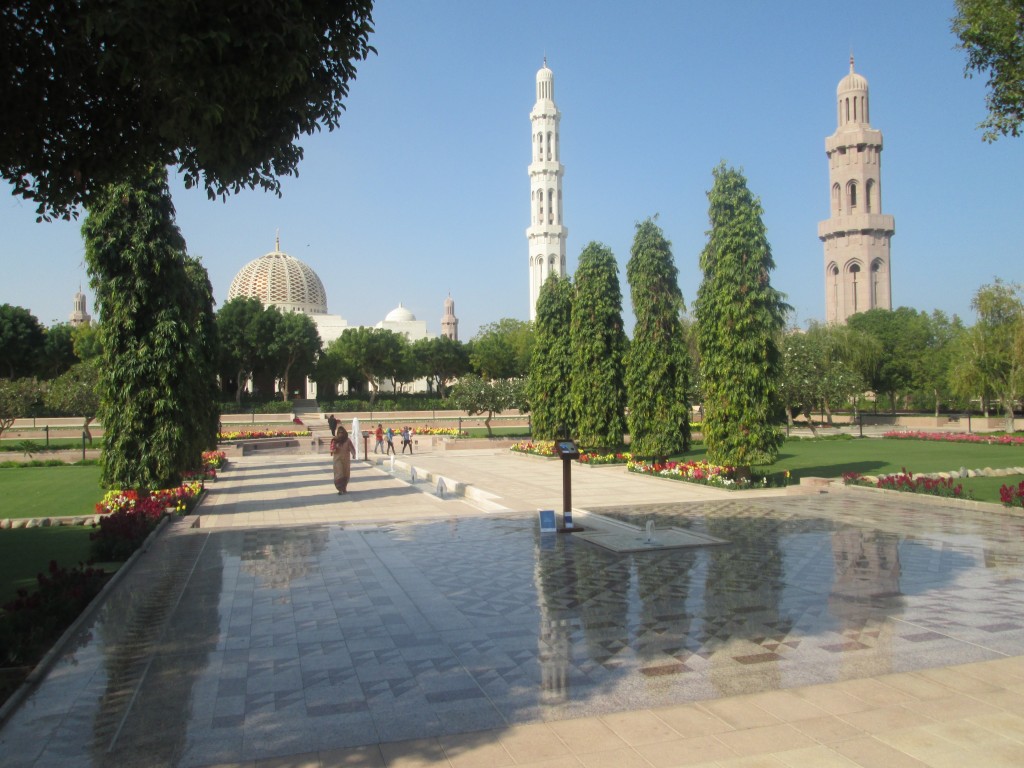 The credit for this strikingly modern country of 4 million people must go to a large degree to its leader, the Sultan Qaboos bin Said Al Said. When Qaboos took over from his father in a bloodless palace coup in 1970, Oman was still mired in an essentially 19th century mode, a Middle East backwater. It had six miles of paved roads. The capital of Muscat had 2 public schools and one hospital.   An almost miraculous period of change followed, as Qaboos united the disparate and disputatious tribes, and  built the vast and complicated infrastructure and institutions of a modern state. Qaboos still rules today and is virtually worshiped by the majority of his people as the guiding light of what has been referred to as the Omani Renaissance.    Although he rules as an absolute monarch, and has many of the trappings of a rich potentate (7 palaces I am told, and at least 2 yachts, each the size of a cruise ship), still his reign has been intelligent, benign, and astoundingly successful in converting the country into an up-to- date, 21st century society. There is deep apprehension about his demise, as he has no children, and the succession remains mysterious and unknown except to Qaboos himself.  Will the next leader be as enlightened and public spirited?

The question of succession is one of two clouds on the horizon for Oman right now.  The other is the low price of oil, a commodity upon which the country is overwhelmingly dependent. Oil has been the key to its prosperity and its renaissance. The government gets over 80% of its revenue from oil, and in an expensive welfare-state system such as Oman’s, where the government is so responsible for much of the well-being of the people and physical development of the country, this is a critical problem.

The greatest resource of the country, on the other hand, could be its savior, and that is the people—robust, energetic, tolerant, open and above all friendly, generous and hospitable. I saw many examples as I walked around the cities with my Omani friends. On one occasion while in a souk (market place) in Muscat the Omani who was accompanying me began talking to a man from Kuwait, discovered some interests in common, and the next thing I knew they were exchanging names, email addresses and phone numbers. On another occasion, with another Omani host visiting an old fortress, my friend started talking to a couple from Germany, and within moments was inviting them to his home. Everywhere I saw Omanis greeting people on the street with handshakes and hugs and talking up the shopkeepers, tourists, laborers and total strangers with ease and evident pleasure. 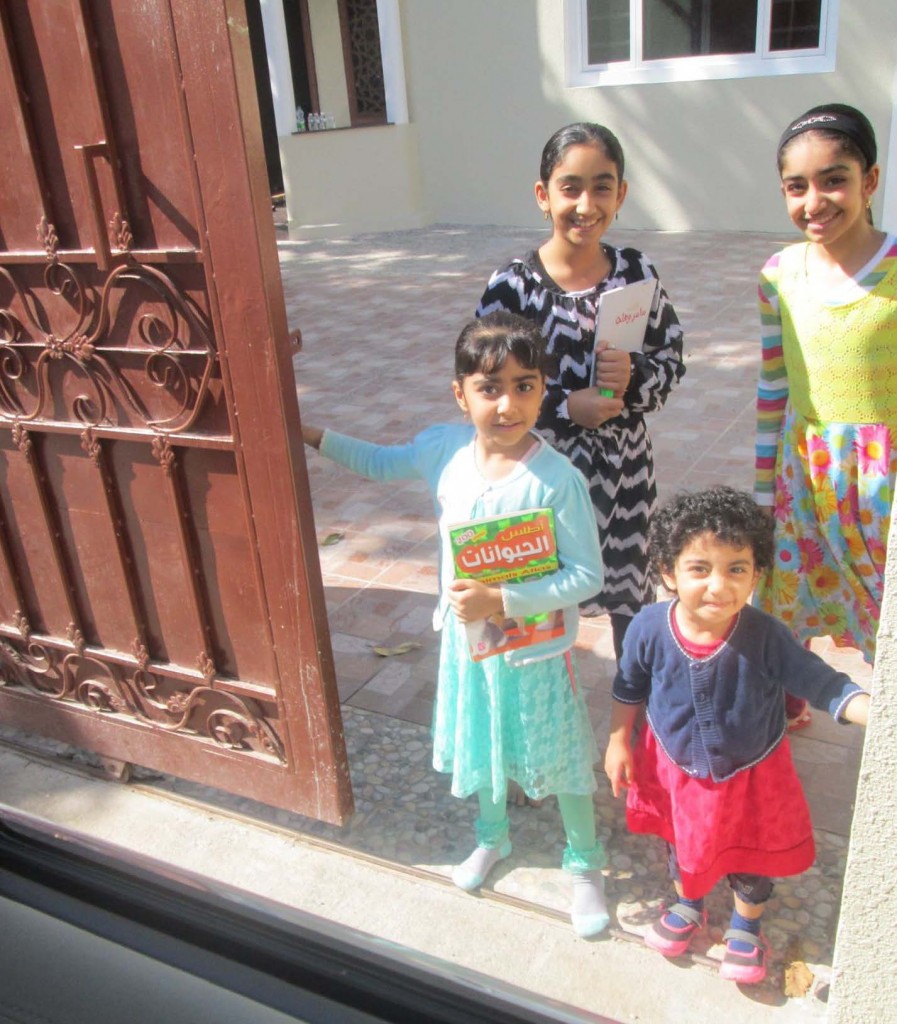 The children of Saud Al Suleimani, holding the books Ward gave them, smile and say goodbye from the gate of their home.

The openness of the people and their leader is reflected in the position of the country in the endless squabbles, disputes, religious schisms, competitions and wars that afflict almost every corner of the Middle East. Oman is an oasis of peace-loving, tolerant neutrality and stability in all of this.  As an example, its friendship with both the U.S. and Iran allowed the Sultan to be a vital intermediary getting the two sides together for the recent negotiations.

It was this neutrality in foreign affairs, the prosperity of the country, the openness and tolerance of the people, –and yes, even the mountains everywhere– that made me feel as if I was traveling in the Switzerland of the Middle East.

Some highlights of my trip and what I consider must-see sites: The Green Mountain in the Al Hajar Mountain Range. Beautiful views, best seen in summer. A superb tourist attraction in the area is the ghost village of Birkat Al Mawz. Another excellent mountain experience is supposed to be Sun Mountain, also in the Al Hajar range. Something that tourists and locals enjoy are visits to the wadis, deep valleys which have been cut by streams that often only flow during rainy periods. Tropical foliage and enjoyable hikes are sometimes available in these areas. I visited what is said to be one of the best, called Wadi Shab, which is north of Sur. Muscat, the beautiful capital city, is full of interesting things. Top tourist sites are the awesome Sultan Qaboos Grand Mosque, which is open for touring, and the Sultan’s Palace, which can only be viewed from the outside. Tourists should also try to get to an event at the Opera House with its beautiful interiors. There are sundry museums and a charming souk near the harbor, where you can usually view a couple of the Sultan’s yachts docked. Up and down the coast are fishing villages and ports which sometimes double as favored resorts. Sur may be the most famous. A drive among the sand dunes is another favorite tourist attraction.

Resources available at the Library and at the University

Oman & Its Renaissance by Sir Donald Hawley, 2010, includes a marvelous collection of pictures and informed text.

Oman: Politics and Society in the Qaboos State by Marc Valeri, 2009 provides a good description of what has been accomplished in Oman during the Qaboos years.