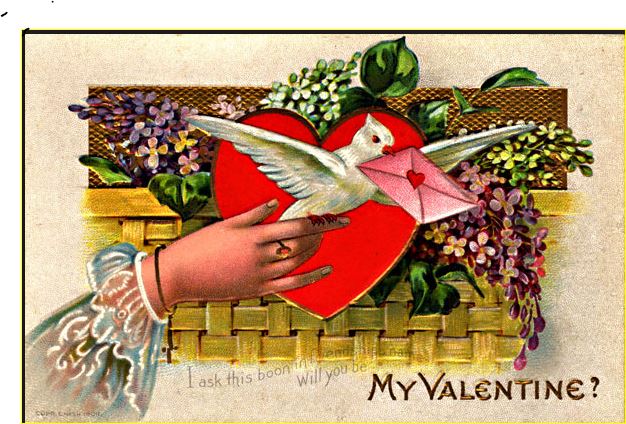 Valentine’s Day, or is it St. Valentine’s Day? Either way, on February 14 each year the holiday is celebrated. Cards, flowers, candy and other gifts are given to sweethearts. Hearts and cupids are popular Valentine’s Day images.

How did this holiday (not a national holiday, but nevertheless widely observed, here and elsewhere) evolve?

How did St. Valentine’s (or the Saints Valentines’) Day become associated with a holiday celebrating romantic or courtly love? In England and France during the Middle Ages many people believed that birds began to mate on February 14. This association of Valentine’s Day and the mating of birds can be seen in the work of the medieval English poet, Geoffrey Chaucer (c.1340-1400). In Chaucer’s “The Parliment of Fowles,” he mentions Cupid and Venus and says, “You know that on Saint Valentine’s Day … You come to choose … Your mates [referring to fowls]” From these ideas Valentine’s Day became associated with lovers and the exchanging of letters, gifts or other tokens.

William Saunders, History of St. Valentine, explains, “While it seems that the exchange of ‘valentines’ is more the result of secular custom rather than the memory of St. Valentine … there is a Christian message that should be remembered. The love of our Lord … is a sacrificial, self-less, and unconditional love. Such is the love that each Christian is called to express in his own life, for God and neighbor.”

In that spirit, this writer is including an untitled poem from Falvey’s Digital Library; it was written by Joseph McGarrity (1874-1940), an Irish American businessman who immigrated in 1890.

Chaucer and the Cult of Saint Valentine (1986) Henry Ansgar Kelly.

“The Origins of St.Valentine’s Day”