“A feather in the plumage of a great eagle” 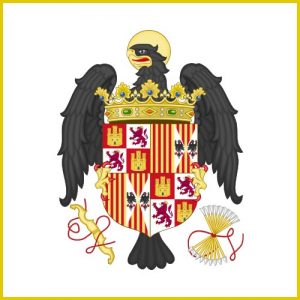 There are two main branches of Augustinians. The body of clerics who loosely followed the rule of St. Augustine (Canons Regular of Saint Augustine) and the monastic, and eventually mendicant religious order that resulted from the Grand Union of 1256 (Order of the Hermit Friars of Saint Augustine). For a brief overview of religious orders in Spain, including the Augustinians, see: Medieval Iberia: An Encyclopedia (Routledge, 2003) pages 701-702.

Villanova University graduate student of Hispanic cultural studies, and instructor of Spanish Ian J. Gates, who has produced a paper which has been submitted for publication and a related research fellowship proposal (The Catholic and Imperial Eagle: Symbol of the Iberian Elite’s Legitimacy), says as a result of the discovery in the AHI, and Falvey’s digitizing of the 1604 work of Fray Osorio on San Juan of Sahagun, “Osorio portrays St. John of Sahagun as a feather in the plumage of a great eagle, the animal which was widely known to be the base of the royal Spanish coat of aims.”