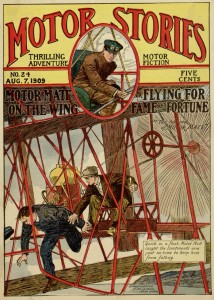 This week’s Project Gutenberg release, built by applying the efforts of Distributed Proofreaders to images from our Digital Library, is Motor Stories #24: Motor Matt on the Wing; or, Flying for Fame and Fortune. While Motor Matt already took to the air by dirigible in several earlier stories, this adventure marks his first encounter with powered flight, a technology that was still quite new at the time of the tale’s writing. As in some other volumes of this series, the mix of familiar dime novel tropes and archetypes with then-cutting-edge technology (occasionally discussed in some technical detail) produces an interesting snapshot of some of the dramatic transitions that occurred in the early years of the 20th century.

The book also includes the conclusion of the “Tricked By Two” story begun in the previous issue along with some brief animal-themed filler articles. The full text may be read online or downloaded through Project Gutenberg.