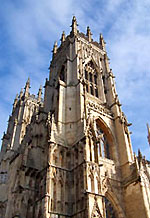 John Waldeby, O.S.A. was an Oxford-educated medieval English Augustinian friar well-known for his preaching. “There are many gaps in our knowledge of the career of John Waldeby” (Hackett 35), but many of his sermons were published in his own day. Father John Rotelle, O.S.A. who was the director of the Augustinian Press until his death in 2002 had a transcription made of Waldeby’s fourteenth-century collection of Sunday sermons, Novum Opus Dominicale, preserved in manuscripts of the Bodleian Library, Oxford (Bodley 687 and Laud misc. 77). This work of Waldeby has been called a reference book and is thought to have been composed in the Augustinian priory library, York, England in the 1360s. For a description of the Bodleian manuscripts see: Margaret J. Morrin, “John Waldeby, O.S.A. (ca. 1315-1372), Preacher” Analecta Augustiniana 35 (1972), 75-76. The transcription commissioned by Rotelle was bound and added to the collection of the Augustinian Historical Institute (AHI). There are several works in the AHI which describe Augustinian John Waldeby, but to have a typed transcription of some of his most important sermons is a boon, because Waldeby’s life and works have continued to be a trove for scholarship. It is for this reason that a digital copy of this transcription has been added to the Digital Library@Villanova University.