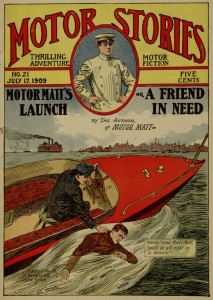 The latest title to be transformed from images in our Digital Library into a Project Gutenberg eBook by Distributed Proofreaders is the twenty-first Motor Stories adventure, Motor Matt’s Launch; or, A Friend in Need. This adventure starts Motor Matt off with a clean slate, as it sends his old friends Carl and Dick off on a trip and allows him to meet a new cast of supporting characters.

Those relieved at the prospect of a break from the German stereotyping of Carl Pretzel will be disappointed to find him replaced with, if anything, an even less sympathetic ethnic portrayal in the form of the unfortunately named Ping Pong, a Chinese character who teams up with Motor Matt after winning a boat in a raffle. The book’s exaggerated racial portrayals are at least slightly offset by the fact that Matt himself steadfastly refuses to join in his fellow characters’ racism, and his kindness and open-mindedness is ultimately shown to pay off — another example of the complexities and contradictions to be found in this series.

As with most issues of Motor Stories, the book is filled out with an extra story, in this case, “The Man-Eater,” telling of an encounter with a dangerous tiger.

The entire book may be downloaded or read online through Project Gutenberg.