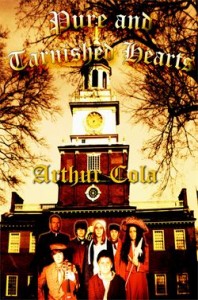 Today, Tuesday, Sept. 15 at 4:00 p.m. in room 204 of Falvey Memorial Library, author Arthur Cola will present a lecture titled “The Silent Chime of the Bell, Immigrants, Riots and Old St. Augustine” about his new book, Pure and Tarnished Hearts.

Arthur Cola was born in Chicago’s “Little Italy” neighborhood on the near west side. His family later moved to Oak Park, Illinois. He attended Loyola University, Chicago, where he met his future wife. He, his wife and family now live in Wisconsin. Cola received his Master’s Degree from the University of Southern Mississippi and performed post graduate work at the University of St. Mary of the Lake, Archdiocese of Chicago and Archdiocese of Milwaukee.

Cola’s seventh novel, Pure and Tarnished Hearts, is a tale of three teens under the leadership of The Rev. Thomas O’Malley, OSA who came to America from Ireland during the famine era. However, it is more than just a coming of age adventure story; it is historically accurate in presenting actual events taking place in the United States during the famine era. This period of history saw riots and protests against new immigrants and Catholics. Villanova University, called Villanova College at the time, is featured in the story, as is the St. Augustine Church and a variety of iconic places in and around the Philadelphia area.

Copies of Cola’s book will be available for purchase and signing after the talk. Light refreshments will be served. This event, co-sponsored by Falvey Memorial Library and the American Catholic Historical Society, is free and open to the public.

If you are interested in learning more about the riots in Philadelphia in 1844, Villanova University’s Digital Library hosts an online exhibit detailing the events leading up to and surrounding the unrest.

“Chaos in the Streets” image courtesy of Digital Library@Villanova