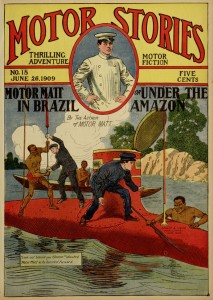 Another week brings another Project Gutenberg release from the Motor Stories series, thanks to the work of Distributed Proofreaders volunteers.

In volume 18, Motor Matt in Brazil; or, Under the Amazon, the Motor Boys continue their adventures aboard the submarine Grampus, finding themselves opposed by the Sons of the Rising Son, a fanatical Japanese nationalist group determined to prevent the craft from falling under the control of the American government. Perhaps it goes without saying that some unfortunate period stereotypes are put on display along the way, and the story’s heroes demonstrate varying degrees of racism, though the narrative is careful to differentiate between the story’s villains and the friendly Japanese government.

The book is filled out with “In the Hands of the Enemy,” a short story involving an African uprising (and, unsurprisingly, some more racist attitudes).

The entire issue can be read online or downloaded through Project Gutenberg.