This beautiful Spanish plaza can be found in Villanueva de los Infantes, which is near the village in which St. Thomas of Villanova was raised.

According to the Villanova University website, the “University is named for a Spanish Augustinian, Thomas García (1486-1555), the son of a miller who was born in Fuenllana, a village near Villanova de los Infantes, Castile, Spain. Thomas studied at the University of Alcalá where he received his master’s degree in 1509, and the insignia marking him as a doctor shortly thereafter. In 1512, he became a professor of philosophy at the University of Alcalá where his lectures were received enthusiastically for their clarity and conviction. In addition, Thomas was praised by his students and colleagues for always being friendly and helpful.”

I like to think Falvey’s subject librarians emulate St. Thomas as they assist faculty, staff, students and visitors with their research needs.

On a lighter and only slightly related note, you might want to check out this cool summer book for kids featuring Thomas the Cat (or Tomas el Gato). It’s written in both English and Spanish! 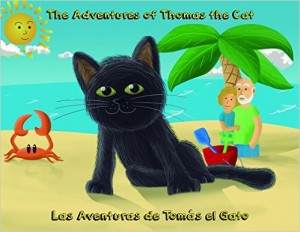