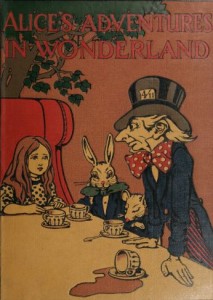 Since this is a library food blog, I like to find recipes that will connect to a book or to reading in general. So this month, to celebrate the 150th anniversary of Lewis Carroll’s Alice’s Adventures in Wonderland, I decided to read this childhood favorite again in the hopes of finding culinary inspiration.

The story begins with Alice half-dozing outside on a hot summer day as her older sister reads a book with “no pictures or conversations in it.” As her mind wanders, she enters another world where animals talk, playing card soldiers double as croquet arches, and a Queen randomly orders executions for trivial infractions. But it’s the Mock Turtle who gets my attention. He goes to school, sings, dances and plays games. We learn of the sad Mock Turtle’s schooling in chapter 9 and he performs the Lobster Quadrille in chapter 10. Both chapters are filled with songs, puns and word play.

I’m not sure if it was the Queen’s mention of Mock Turtle Soup or if it was the Turtle Soup song that inspired me to make soup. And there was no doubt in my mind that it would be the mock version of turtle soup. The ingredients would be easier to find and cheaper than using real turtle. That, combined with the happy childhood memories of finding cute little turtles near Fern Hill Lake, prevented me from considering turtle meat. 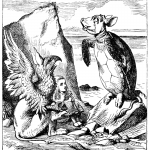 In the earliest publication of Alice’s Adventures, the Mock Turtle was beautifully illustrated by Sir John Tenniel, who showed the character with a calf’s head and hoofs instead of flippers on his hind legs. He may have been inspired to draw the Mock Turtle this way because of the transition to “dull reality” as Alice’s sister thought of how “the lowing of the cattle in the distance would take the place of the Mock Turtle’s heavy sobs.”

Instead of making the traditional Victorian mock turtle soup, which calls for calf’s head and heels, I adapted a Louisianan recipe from the In a While, Crocodile cook book that had a little more kick to it. In addition to ground beef, I added ground veal, as a nod to the traditional calf ingredient.

1 teaspoon hot sauce (more if you like it hotter)

Salt and pepper to taste 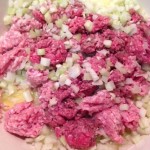 Saute the meat, celery, garlic, and onion in butter until meat is brown and veggies are translucent. Add to the slow cooker (6 quart or larger).

Add lemon juice, parsley, and eggs. Stir well and cook for another 30 minutes. If desired, skim and discard fat from top of soup. 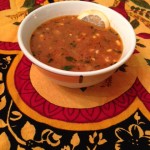 If you’re looking for a historically accurate mock turtle soup recipe, try the one copied below, from Martha Lloyd’s Household Book. (Martha was a close friend of Jane Austen.)

Take a large calf’s head. Scald off the hair. Boil it until the horn is tender, then cut it into slices about the size of your finger, with as little lean as possible. Have ready three pints of good mutton or veal broth, put in it half a pint of Madeira wine, half a teaspoonful of thyme, pepper, a large onion, and the peel of a lemon chop’t very small. A ¼ of a pint of oysters chop’t very small, and their liquor; a little salt, the juice of two large onions, some sweet herbs, and the brains chop’t. Stand all these together for about an hour, and send it up to the table with the forcemeat balls made small and the yolks of hard eggs.

“The Mock Turtle sighed deeply, and began, in a voice sometimes choked with sobs, to sing this:—

‘Beautiful Soup, so rich and green,

Waiting in a hot tureen!

Who for such dainties would not stoop?

Soup of the evening, beautiful Soup!

Soup of the evening, beautiful Soup!

‘Beautiful Soup! Who cares for fish,

Game, or any other dish?

Who would not give all else for two

Pennyworth only of beautiful Soup?

Pennyworth only of beautiful Soup?