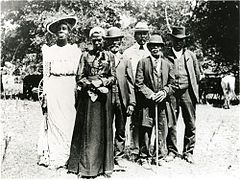 Today is the sesquicentennial of Juneteenth, the nineteenth of June, and the day that marks the end of slavery in the United States. Though the Emancipation Proclamation was signed two and a half years earlier in 1863, at that time without mass media, it actually took the physical arrival of Major General Gordon Granger and his Union soldiers in Galveston, Texas to announce to the last of the held slaves there that the Civil War had ended and that they were free. Hence, birthing a new Independence Day.

Juneteenth not only commemorates the abolition of slavery but also is growing to be a multicultural and global celebration of  freedom in general. Specifically, it is an opportunity to build cultural awareness, and in many communities, to educate young African-American generations about the struggles of their past and how their ancestors prevailed. Gratitude and pride, story and song make up many Juneteenth celebrations.

Also in recent news is one of the country’s most legendary abolitionists, Harriet Tubman. Ms. Tubman recently emerged the winner of a public survey (Womenon20s.org) to nominate the first woman to appear on U.S. paper currency. Though the selection, and even the process, was subject to debate (e.g., some see it as hush money, some see it as ‘money’,) the accomplishments of this brave abolitionist in her very dangerous times cannot be minimized. News broke Wednesday, June 18, that the $10 bill, which now depicts Alexander Hamilton, will definitely feature the portrait of a woman, though her identity is yet to be determined. The Treasury Secretary Jacob J. Lew will determine the person by the end of 2015, with the new currency appearing in 2020 — the 100th anniversary of the 19th Amendment.

Explore further the intriguing times after the Emancipation through the following Falvey resources about Juneteenth and Harriet Tubman, curated by history liaison, Jutta Seibert. She’s also included some links on what actually goes into making the U.S. dollar bill. Contact Jutta here for her guidance through your research needs and also for her help navigating the wealth of books and online library materials.

2. Books about Harriet Tubman in the Falvey collection:

7. A Brief History of the Bureau of Engraving and Printing.
http://purl.access.gpo.gov/GPO/LPS66871

8. All you ever wanted to know about the dollar:
Currency Notes. [Washington, D.C.]: Bureau of Engraving and Printing, 2004.
http://purl.access.gpo.gov/GPO/LPS66873