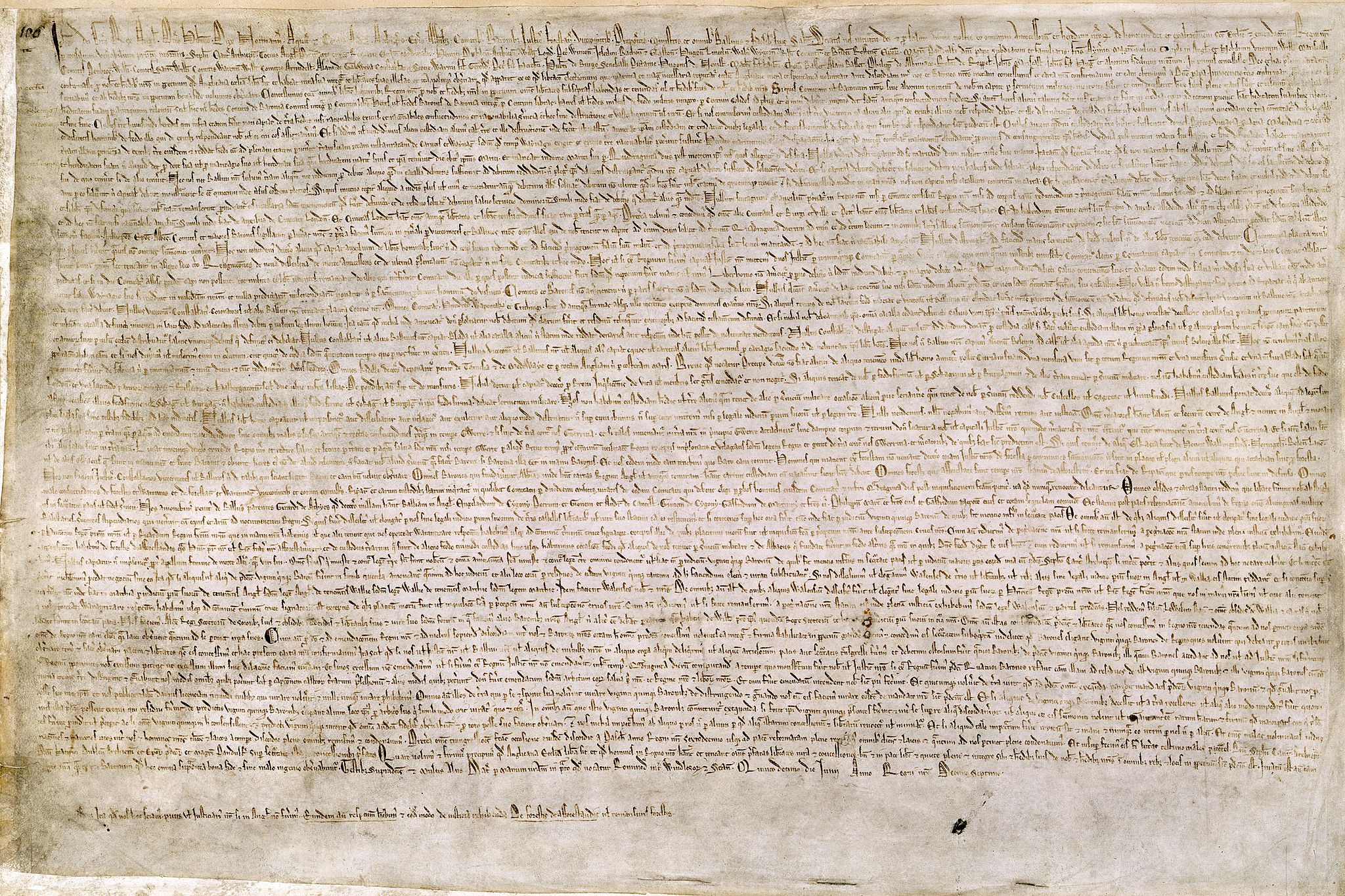 The Magna Carta (originally known as the Charter of Liberties) of 1215, written in iron gall ink on parchment in medieval Latin, using standard abbreviations of the period, authenticated with the Great Seal of King John. The original wax seal was lost over the centuries.[1] This document is held at the British Library and is identified as “British Library Cotton MS Augustus II.106” One of four known surviving 1215 exemplars of Magna Carta. Source Britishlibrary.png This file has been provided by the British Library from its digital collections.

John, by the grace of God King of England, Lord of Ireland, Duke of Normandy and Aquitaine and Count of Anjou, to his archbishops, bishops, abbots, earls, barons, justices, foresters, sheriffs, stewards, servants and to all his officials and loyal subjects, greeting.

Though most of its clauses have been repealed, the Magna Carta – celebrating its 800th anniversary today – still stands as a framework and rallying cry against the arbitrary use of political power.

Signed June 15, 1215 by King John in Runnymede, (and not Runnemede, NJ, for those of us who have watched too much local news) this medieval document was composed as a peace treaty between the king and his subjects.

John, according to history (and to this entertaining British Library-produced video narrated by Monty Python’s Terry Jones,) was allowing power to go to his head – having allegedly imprisoned his wife, murdered his nephew, and raising taxes to pay for expensive foreign wars and wasteful expansionism. His barons had had enough and imprisoned John, forcing him to negotiate and follow the rule of law himself. Though most of of the document was rewritten within its first ten years, three of its original clauses still stand in English statute books: one granting liberties to the English Church, one granting certain privileges to the city of London, and third and most important, the right to a trial by jury. To writ:

“No free man shall be seized or imprisoned, or stripped of his rights or possessions,or outlawed or exiled, or deprived of his standing in any other way, nor will we proceed with force against him, or send others to do so, except by the lawful judgement of his equals or by the law of the land.

Ideas in the Magna Carta are also reflected in theories of representative government and influential behind the cries of “no taxation without representation” which sparked the American Revolution and ultimately were incorporated into the US Bill of Rights. Worth viewing is the Library of Congress’ recent digital exhibit, Magna Carta: Muse and Mentor. Its overview material states that, “by examining the ways in which Magna Carta has been interpreted in English and American constitutional law and politics, this exhibition demonstrates how principles such as due process of law, the right to a jury trial, freedom from unlawful imprisonment, and the theory of representative government emerged from a tradition that began 800 years ago.” 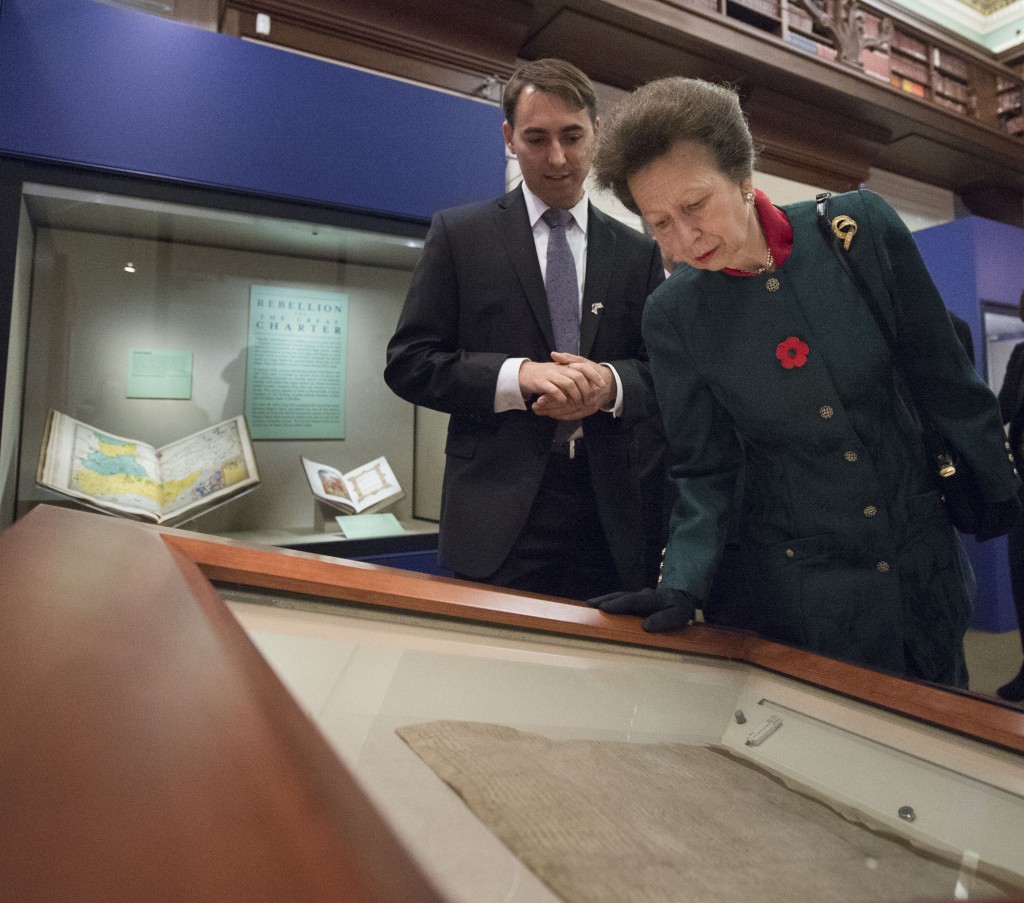 Can one still view the original Magna Carta?

Yes, If you happen to find yourself in Merrie Ol’ England, you can visit one of three original parchments of the document, or several other locations with amended or later versions. In fact, last week, Princess Anne officially reopened Lincoln Castle after a “multi-million pound refurbishment” that included a new vault for housing that city’s original copy of the document.

But if you’d rather save your pounds for a rainy day, you can still get up close and personal with the Magna Carta by viewing the extensive array of Falvey resources gathered by subject librarian for political science and geography, Merrill Stein. 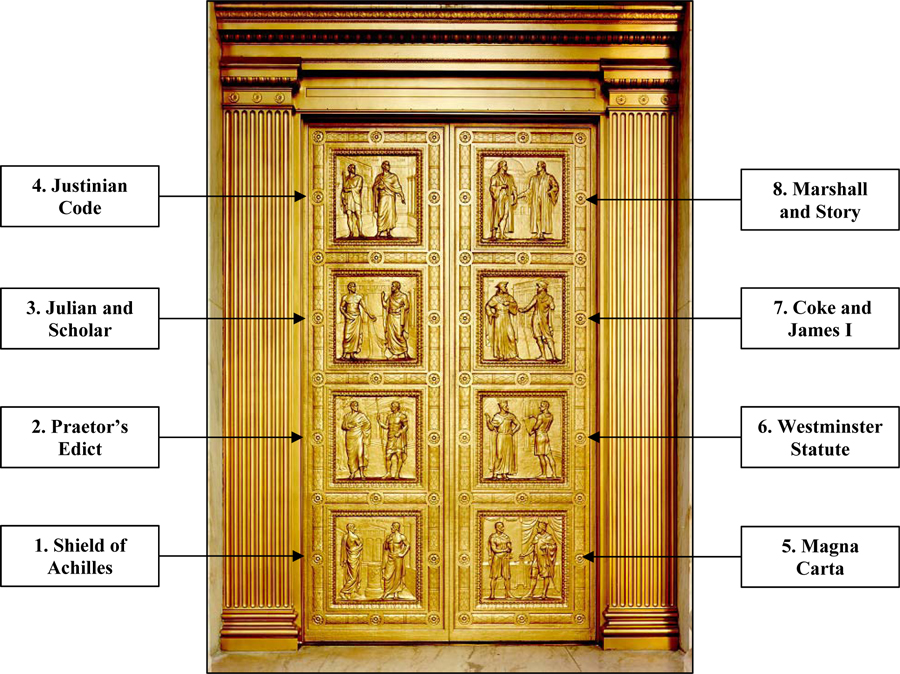 On the famous bronze doors of the Supreme Court in Washington DC, there are eight images; three are dedicated to the Magna Carta (5,6 & 7).