A Brief Look at Italian and English Renaissance Drama

Did yesterday’s blog post about Renaissance Faires whet your appetite for Renaissance Drama? Look no further than this thoughtfully assembled blog by Sarah Wingo, Subject Librarian for English Literature and Theatre.

When you hear the word Renaissance you may think of Michelangelo painting the ceiling of the Sistine chapel and Leonardo da Vinci’s Mona Lisa, or you may think of Queen Elizabeth I and Shakespeare. In both cases you’d be right, but you may not be aware that you’re thinking of two fairy distinct (though overlapping) time periods. The European or Italian Renaissance spanned the 14th to the 17th century beginning nearly a century before the Renaissance would truly gain momentum in England in the late 15th century and extend to beginning of the 17th century.

The Renaissance period in Italy and England were both characterized by a “revival of the arts and high culture under the influence of classical models” (OED), but each also had traditions and art forms distinctly their own.

One area in which Italian arts and English arts diverged was theatre. 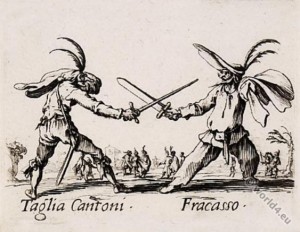 In Italy a form of theatre known as commedia dell’arte[i] was popularized between 1575 and1650. Performed in open spaces and at fair grounds commedia dell’arte was largely improvised versions of familiar tropes. Commedia stories relied upon stock characters which were divided into 3 categories the lovers, the masters, and the servants, with distinctive characters belonging to each category such as Pantalone a greedy Venetian merchant. These characters were easily recognized by their distinctive clothing and the masks that they wore, thus allowing audiences to immediately identify heroes and villains within any story being told.[ii]

Most people will be more familiar with the theatre of the English Renaissance due to the enduring popularity of William Shakespeare. Shakespeare’s earliest plays were likely performed in the mid-1580s. From 1594 onwards his works were performed by the Lord Chamberlain’s Men, a company of players of which he was part owner, who later became The King’s Men after being awarded a Royal Patent by King James I in 1603.

Shakespeare is the most well-known playwright from the English Renaissance at least in part due to the fact that more of his plays survive, thanks to their publication in the First Folio in 1623, than do the plays of most other playwrights from that era. Because plays were considered common entertainment rather than high art plays were not regularly published[iii], in fact of the 36 plays published in the Shakespeare’s First Folio only 16 existed in published form prior to the printing of the folio meaning that a full 20 of Shakespeare’s plays including Macbeth, The Tempest, and Twelfth Night would be unknown to us were it not for the printing of the First Folio. Likewise of the thousands of plays produced by numerous playwrights throughout the English Renaissance only a small percentage survive to this day. 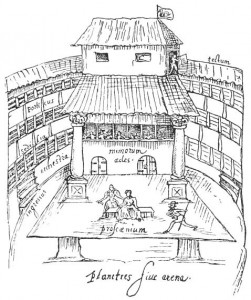 Although there were some indoor performance spaces such as those at court and Blackfriars most theatres including The Globe where Shakespeare’s plays were performed from 1599 until it burnt down in 1613, were rounded open air structures with seating around the walls of the building and cheaper standing space in the center around the stage as can be seen in this image of The Swan Theatre, a contemporary of The Globe.

Theatre companies functioned as repertory, with a rotation of plays in performance, rarely performing the same play two days in a row. Theatre companies were also comprised entirely of men, female characters famously being played by “boy actors,” though the term “boy” may be misleading as it is believed that while the female roles were played by young men, they were not as was once believe played by children.

One reason that theatre from this period is so important is that it is really the first time that the Western World begins to see secular theatre performed in much the same way that modern theatre is performed today. The plays themselves also being very recognizable as modern theatre in stark contrast the highly stylized and religious liturgical dramas and morality plays which preceded the theatre of Shakespeare and his contemporaries. [iv]

[ii] Read more about Commedia dell’arte at the Metropolitan Museum of Art website.

[iv] Andrew Gurr has written prolifically on the topic of English Renaissance drama, and his books The Shakespearean stage, 1574-1642 and Playgoing in Shakespeare’s London would be of particular interest to anyone wishing to learn more on this subject.