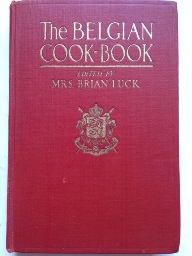 While visiting my nieces, one of them showed me a cookbook she found and thought I might like to borrow. The Belgian Cook-Book (1915), edited by Mrs. Brian Luck, who apparently has no first name of her own and is referred to as M. Luck elsewhere in the book, is owned by only 58 libraries in the world, according to WorldCat.

The editor, M. Luck, collected recipes from “Belgian refugees from all parts of the United Kingdom” and intended this “small manual…for the use of the work-a-day and inexperienced mistress and maid.”  The preface, as well as the recipes, are filled with amusing expressions and anecdotes.

A newer edition was published by Baker & Taylor in 2006. There is also a digitized copy of the 1915 edition available through Project Gutenberg, which proved handy while cooking one of the recipes displayed on my iPad.

I was torn between using a recipe calling for asparagus, an early spring vegetable, or for mushrooms, which are typically harvested in spring or fall. Since the local asparagus crop at the farm in my area isn’t quite ready, I decided to go with mushrooms.

An image of the 1915 recipe is displayed below with my translation under it. 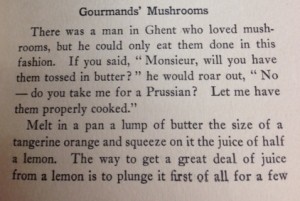 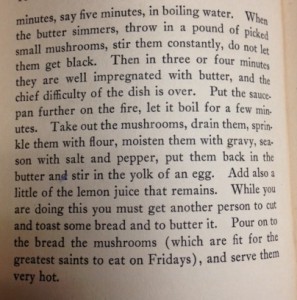 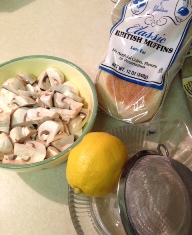 Warm a whole, uncut lemon in boiling water for 3-5 minutes. Remove lemon from hot water and cut in half, squeeze one half lemon and set aside. Place butter in heavy saucepan over medium heat. Add lemon juice. When butter & lemon start to simmer, add mushrooms and cook until some of the liquid has been absorbed. Don’t allow the mushrooms to brown.

Remove mushrooms from pan with slotted spoon, leaving the juices in the pan. Toss mushrooms with flour, salt, and pepper. Return floured mushrooms to pan over low heat. Add one egg yolk and stir until thoroughly mixed with mushrooms. Add a few drops of water or chicken broth to moisten if needed. You can also add a few more drops of lemon juice to taste. 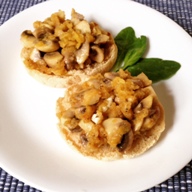 I leave you with this comment about savories from Madame Luck:

“If you serve these, let them be, like an ankle, small and neat and alluring.”