What is the latest news about the conservation of “The Triumph of David,” the large painting attributed to Pietro da Cortona, located in the Reading Room of Falvey Hall (aka Old Falvey)? 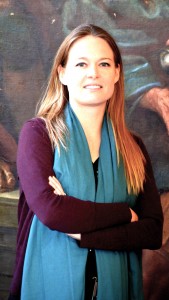 Kristin deGhetaldi, and her interns are now in-painting (filling in with color the areas where paint was lost). This in-painting is a slow process, using very soft, fine pointed brushes to make tiny strokes. Thus, you are not likely to see dramatic changes day to day or even week to week.

However, one very obvious change to the room is the addition of a small exhibit housed in two cases, one on each side of the gated entrance to the painting. This exhibit, designed by Laura Bang, Digital and Special Collections curatorial assistant, will remain on display until the conservation of “The Triumph of David” is completed.

In her introduction to the exhibit, Bang explains, “Princess Ruspoli’s adopted daughter, Maria Theresa Droutzkoy, also a princess after marrying a Russian prince in 1945, provided funds for the framing and conservation of “The Triumph of David” in the 1950s. [The painting itself was donated to Villanova University by Princess Ruspoli.] She and her husband, Prince Alexis Droutzkoy, donated some other art to the University at the same time, as well as four books that were donated to the Library’s Special Collections, on display in these cases.”

The two books in the left case are both open to show illustrations. The first book is Catalogue of Paintings Forming the Private Collection of P. A. B. Widener: Ashbourne, Near Philadelphia, written by Aliene Ivers Robinson and published in Paris in 1885. The large black and white illustration shows a man with two horses in an expansive landscape. At the time this catalog was published, it was not possible to print photographs in books, so what is shown is a black and white engraving of the painting.

P. A. B. Widener, Peter Arrell Brown Widener (1834-1915), was a wealthy Philadelphia businessman, an art collector and a former Philadelphia city treasurer. His collection included works by Rembrandt van Rijn, Frans Hals, Jan Steen, Edouard Manet and Auguste Renoir. Ashbourne, the residence named in the book’s title, still stands in Elkins Park although it is now called Lynnewood Hall. In 1940 P. A. B. Widener’s sole surviving son, Joseph, donated over 2,000 items from his father’s collection—sculptures, paintings and decorative arts—to the National Gallery of Art.

The Catalogue of Paintings itself was donated to Special Collections in 1961. It is number 17 of an edition of 250. Widener gave this signed book to Aliene Ivers Robinson. One wonders how it made its way into the possession of the Droutzkoys. 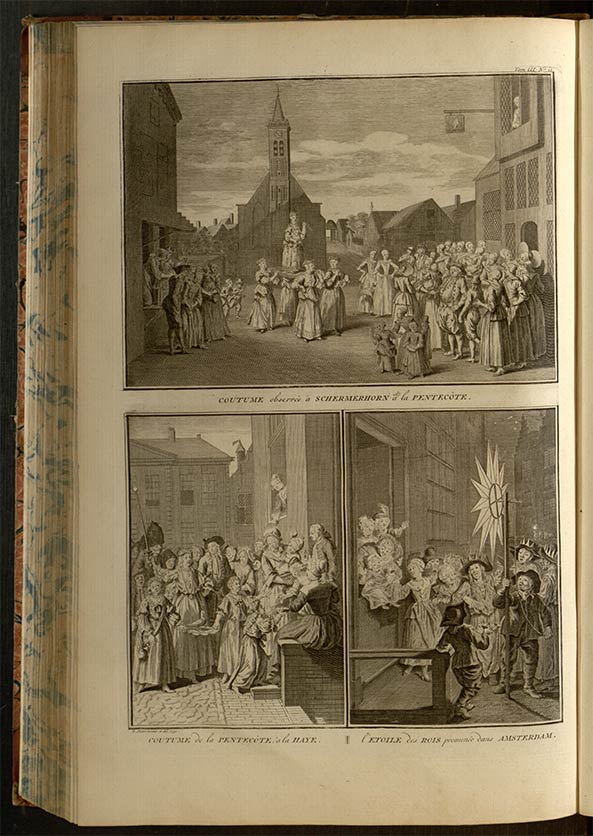 In the same case is volume three of the 12 volume set of Cérmonies Et Coutumes Religieuses De Tous Les Peuples Du Monde: Représentées Par Des Figures Dessinées De La Main De Bernard Picart [Religious Ceremonies and Customs of All the Peoples of the World: Illustrated by Hand Drawn Pictures by Bernard Picart]. The text, in French, is by Jean Frederick Bernard of Amsterdam; the engraved illustrations, as noted in the title, are the work of Bernard Picart. This large volume was published in Paris in 1807.

Picard and Bernard intended to document the rituals and ceremonies of all the religions known at the time. Cérmonies Et Coutumes Religieuses …, volume three, discusses the Greeks and Protestants. It is opened to show text on the right and three illustrations on the left page. Two of the illustrations show ceremonies on Pentecost in The Hague (Netherlands) and Schmerhorn (Germany); the third illustration is titled “The Kings’ Star Carried (or on Parade) through Amsterdam[Netherlands].” The three Kings are likely the Magi. Falvey’s Digital Library has all 12 volumes of this edition digitized.

The second case holds two additional books donated by the Droutzkoys: Shelley and Keats As They Struck Their Contemporaries: Notes Partly From Manuscript Sources by Edmund Blunden, and an untitled photograph album. Shelley and Keats … was published as an edition of 310 copies in London in 1925. Falvey’s copy is number five, and it is signed by Blunden, the editor; by the designer, Wyndham Payne; and by the publisher, binder and typographer, Cyril W. Beaumont. Payne also designed the cover, a wallpaper-like pattern, as well as the decoration of the title page. Prince Droutzkoy donated this book in 1960.

A bit of research provided additional information: Giacomo Brogi (1822-1881), an Italian photographer, founded a company in Florence which published photographs. In the late 1800s the company employed 85 people. Brogi photographed not only Florence but also other sites in Italy, and he traveled to the Middle East in 1868. Giacomo Brogi had shops in Florence, Naples and Rome.

His son, Carlo Brogi (1850-1920), continued the business after his father died. Carlo Brogi sold both his own and his father’s photographs under the label “Edizione Brogi Firenze.” This writer speculates that the photographs on display date from the 1880s and that the album may have been purchased as a souvenir of someone’s trip in a time, very unlike ours, when few people owned cameras.

One wonders where and when Prince and Princess Droutzkoy acquired these books. And did they purchase them as collector’s items, or did they enjoy them for their aesthetic appeal?