The Bureau of Investigation case files are hosted on the EBSCO Fold3 platform. The files are labeled as FBI case files while the collection itself is called Bureau of Investigation case files. It consists of four series, Bureau Section Files, Mexican Files, Miscellaneous Files and Old German Files. Although browsing is an option, it is not a productive approach as file names consist mostly of numbers and personal names. The basic keyword search is a good starting point. Results can be filtered and searches can easily be modified. Scanning documents is at times challenging as the pages of some files are lined up from right to left. 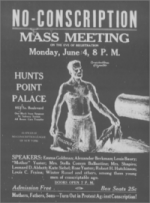 The case files cover the years 1909 through 1921 and contain reports and documents related to World War I and the surveillance of groups suspected of un-American activities. The Bureau’s agents regularly reported about labor organizations, the radical press and “Negro subversion.” The case files include pamphlets and magazines published by the “radical press,” such as complete issues of The Masses. Interesting examples from the collection include Babe Ruth, who was investigated as an “alleged slacker,” a.k.a. draft dodger, Joseph McGarrity, whose surveillance files are part of the Old German Files as he was considered a friend of the Germans, and Emma Goldman, the well known anarchist.  Margaret Sanger’s activities were closely watched as well. Her files include pamphlets about her speaking engagements and some of her publications. The short but politically turbulent time period covered by the case files will guarantee many interesting discoveries.

Links to the collection can be found in the online catalog, on the Databases A-Z list and on the history subject guide. Questions or comments? Contact me directly (jutta.seibert@villanova.edu) or post your comments online.