Alexander Williams is the research support librarian for the social sciences and liaison to the communications, sociology, and criminal justice departments. 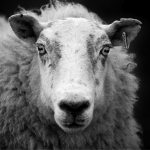 Winter is coming. No, seriously. I’m not just quoting the motto of House Stark from George R.R. Martin’s A Song of Ice and Fire series. Winter is really coming and, to many of us, that means getting out the wool blankets, scouring online stores for the most fashionable wool clothing, and getting ready for the holiday shopping season. However, many of us perhaps aren’t aware that the wool industry is an inhumane one and that buying wool directly contributes to the suffering of sheep. Please join me and millions around the globe by participating in #WoolFreeWinter (warning: some viewers may find the content upsetting).

A: As first reported by NBC, eyewitness investigations into the wool industry led by People for the Ethical Treatment of Animals (PETA) revealed the horrific conditions under which sheep are raised and sheared in the United States and Australia, the world’s biggest wool exporter. As a result of this international exposé, PETA initiated the campaign #WoolFreeWinter to educate the public about this cruel industry and to raise awareness about ethical alternatives to wool before the winter season.

Q: But don’t sheep need to be shorn?

A: Unlike wild sheep, which naturally shed their wool, domesticated sheep have been bred for increased wool growth and do need to be shorn. While this industry sounds humane theoretically, it is, in reality, a nightmare.

Undercover investigators found that sheep were killed, mutilated, stomped upon and brutally beaten during the shearing process. These acts occur because shearers are paid by volume, not by the hour.

An experienced shearer can “handle” more than 350 sheep a day over a four week period. Shearing sheep as quickly as possible for profit inevitably leads to a disregard for their wellbeing.

A sheep’s skin is quite wrinkly because it is maximized for wool growth, but it also collects moisture making it prone to infection. Flies are attracted to this moisture and lay eggs in the folds of skin (flystrike), leaving fly larvae (maggots) to nest and then eat the sheep alive. In the wool industry, a barbaric operation called “mulesing” is performed to prevent this condition, during which strips of flesh are cut from a lamb’s back and buttocks to create scar tissue that won’t collect moisture. However, this procedure is not always effective. Mulesing, in addition to castration, dehorning, and tail docking, is often performed without anesthetics, and infections from these mutilations can lead to a slow and agonizing death. Once sheep cease to produce quality wool, they are then shipped worldwide in overcrowded, multilevel ships to slaughterhouses without concern for their welfare.

A: The best thing you can do is to not buy wool products. Check clothing labels and, if an item includes wool, put it back on the shelf. Wool may also be listed as mohair, pashmina, shahtoosh, or cashmere, but any kind of wool amounts to animal suffering.

If this information shocks you, you can help save the lives of animals everywhere from the horrors of the fur, leather, angora and down feather industries, too.

Q: Is there such a thing as “humane wool?”

A: While PETA states that “there is no such thing as humane wool,” wool suppliers have taken significant steps to establish more humane wool practices since PETA’s initial investigations into the industry, which caused widespread protest and millions of dollars in company losses. If you would still prefer wool clothing, be sure to enquire of the retailer whether their products are ethically sourced. The Merino Company, (http://www.merinocompany.com/index.asp), New Merino (http://newmerino.com.au/wp/brand-owners/mulesing/), and Plevna Downs (http://www.plevnadowns.com.au/index.htm) are three companies that pride themselves on supplying non-mulesed wool to numerous brands and retailers. Humane companies like these usually undergo auditing, on-site veterinarian evaluations, and something called a traceability, traceback, or “Sheep to Shelf” system, so that one can identify the growers (or even the individual sheep themselves!) who produced the wool. It might also be worth investigating smaller farms, societies, and organizations in your area that shear sheep as a heartfelt hobby and create only small amounts of wool products for limited distribution.

Q: What are the alternatives to wool?

Alternatives to wool include cotton, cotton flannel, hemp, bamboo, polyester fleece and other cruelty-free fibers. Two other options include Tencel, a new durable and biodegradable substitute, and Polartec Wind Pro, which is made from recycled plastic bottles and offers four times the wind resistance of wool. Check out PETA’s cruelty-free shopping guide for revealing information about the fashion industry and ethical alternatives to animal products.

By choosing an alternative, you will not only directly help the lives of sheep but also avoid the common problems with wool: prone to retaining unpleasant odors, open to moth and mildew damage, not very durable, expensive, difficult to clean, able to shrink and stain easily, very itchy and/or can cause allergies.

Do more for these gentle and intelligent beings that share many characteristics with us. Spread the word by sharing on Facebook and Twitter and ignite change this #WoolFreeWinter.

Schecter, A. (2014, July 19). PETA: There’s no such thing as humane wool. NBC News. Retrieved from http://www.nbcnews.com/news/investigations/peta-theres-no-such-thing-humane-wool-n151326

Withnall, A. (2014, July 10). US and Australia wool industries exposed in shocking undercover footage captured by animal rights group. The Independent. Retrieved from http://www.independent.co.uk/news/world/americas/us-and-australian-wool-industries-exposed-in-shocking-undercover-footage-captured-by-animal-rights-groups-9597552.html

PETA. (2014). Inside the wool industry (with bibliographic references). Retrieved from http://www.peta.org/issues/animals-used-for-clothing/animals-used-clothing-factsheets/inside-wool-industry/

Galbraith, F. (2009). Died in the wool (with bibliographic references). Retrieved from http://www.thebigcoverup.org.uk/wool/