One Hundred Years Ago – The World War I Christmas Truce 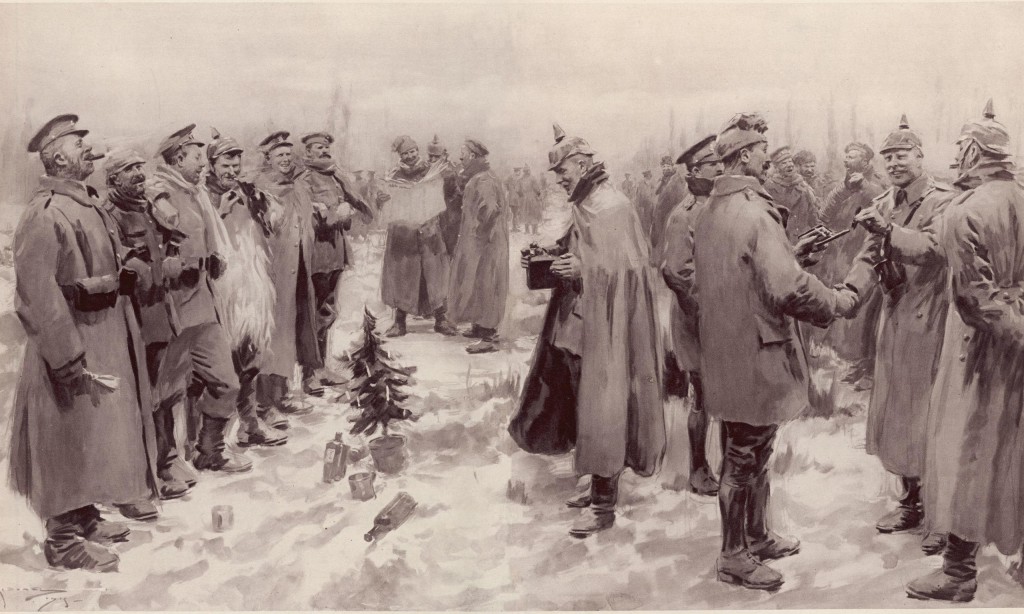 In December 1914 conditions for soldiers on both sides of No Man’s Land in Flanders were dreadful – water logged trenches, mud, cold rain, and dead bodies in various states of decomposition lying unburied in the land between the lines. Out of this misery came the Christmas Truce, a truce that evolved from the lower ranks upward. Earlier, Pope Benedict XV had asked for a Christmas cease-fire, but both sides rejected his request.

Both the German and English troops had received Christmas packages, some from families and friends and others, official gifts from their governments. The English soldiers received “Princess Mary boxes”: metal boxes engraved with an outline of the princess, daughter of King George V. These gift containers were filled with butterscotch and chocolate, tobacco (cigarettes for the soldiers and cigars for officers), a picture of Princess Mary and a greeting from King George V, “May God protect you and bring you safely home.” Germans received their gifts from Kaiser Wilhelm II. Each soldier received a meerschaum pipe and their officers received cigars. The German troops were also given small Christmas pine trees with candles and decorations. And by Christmas Eve the rain had stopped and skies were clear.

Thus a sense of goodwill had spread through the trenches by Christmas Eve (and Weintraub, p. 3, explains, “… the ordinary British soldier had no strong feelings about fighting the Germans …”); in one area Germans sent a chocolate cake to the nearby English soldiers, accompanied by a request for a truce so that the Germans could celebrate their captain’s birthday. They planned a concert for that evening and would place candle-lighted trees on the parapets of their trenches. The English accepted the German proposal and offered tobacco as a gift. At 7:30 p.m. on Christmas Eve the Germans began to sing; both sides applauded each song and the English were invited to join the Germans in singing.

On Christmas Eve at Lille the British Royal Flying Corps flew over the German airfield and dropped a well-padded Christmas pudding. The following day, a German pilot bombed the English with a bottle of rum.

On Christmas day, soldiers exchanged newspapers, cigars and cigarettes; held joint religious services in No Man’s Land; buried their dead; and talked to each other in English and broken English (few English soldiers spoke German, but many of the Germans spoke at least some English, having worked in England before the war). Soldiers exchanged food, sang, took photographs of each other and played soccer. They also drained and repaired the trenches, repaired wire entanglements and brought ammunition and other supplies to their front lines.

On the day after Christmas, Boxing Day in England and St. Stephen’s Day for the Germans, some areas continued to observe a truce, but generally hostilities were reluctantly resumed. The war, which both sides had expected to be brief, continued into 1918. There were no more Christmas truces. But for one short time there was “Peace on earth and good will toward men.” Today, a wooden cross set in a concrete base surrounded by poppies that bloom in season commemorates the Christmas Truce.

On December 12, 2014, the Duke of Cambridge attended an English dedication ceremony for a monument to the Christmas Truce. The monument is located in the National Memorial Arboretum, a 150 acre site in Alrewas, Staffordshire. The memorial is funded by the Football Remembers partners; it is part of a series of events being held in December.

Dig Deeper
For a comprehensive examination of the truce see Silent Night: The Story of the World War I Christmas Truce by Stanley Weintraub.

For general information about World War I, see any of the numerous histories in Falvey’s collections. A few are listed below.
Almanac of World War I by David F. Burg.
World War I: A History
World War I: Encyclopedia
The First World War by Ian Cawood.