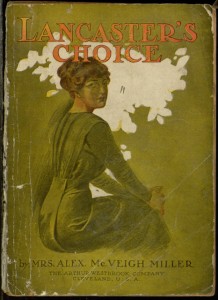 Cited by the author as one of her favorite works, this novel is a bit different from the majority of her stories. If the average Mrs. Miller novel feels like a 19th century soap opera due to its melodrama and wild plot twists, Lancaster’s Choice instead feels more like a romantic comedy, with a much more restrained and predictable plot laced with the occasional humorous situation. While Mrs. Miller’s more over-the-top works usually appeared in high-profile story papers like the New York Family Story Paper and the Fireside Companion, this one was serialized in the short-lived New York Monthly Fashion Bazaar, which presumably aimed for a different tone than its contemporaries.

Fans of Mrs. Miller may be disappointed by the milder tone of this story, but they may at least be interested to see the overt use of humor, perhaps an indication that some of the absurd situations in the author’s melodramatic work were constructed with tongue in cheek.

The entire novel may be read online or downloaded in eBook format at Project Gutenberg.