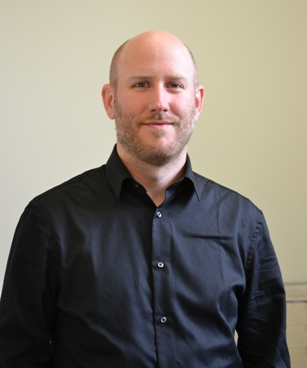 Andrew Swayze, a recent transplant from the Boston, Mass., area, joined Falvey as an Access and Information Services Specialist. He is originally from Paoli, PA, although he had spent many years in the Boston area, most recently working seven years for the Massachusetts Institute of Technology (MIT) Libraries. He first moved north to attend Berklee College of Music.

More about Andrew Swayze in his own words:

“Buildings on the MIT campus don’t have names; they only have numbers. (Well, some have names, but no one uses or knows them.) I keep trying to call Falvey Memorial Library ‘Building 17,’ since that’s what it’s assigned on the campus map, and people look at me like I’ve lost my mind. They’re probably not entirely wrong about that…”

If you could be a superhero, who would you be?

“The Doctor.” [From the show Doctor Who?] “Yup. Madman with a blue box and a screwdriver. Seems right up my alley.”

Do you have any super powers?

“I tried to leap a tall building in a single bound once, but ended up pulling a ham string. However, I am really good at rebooting computers and drinking coffee.” [These skills should prove useful in Falvey.] “I’m already drinking coffee like a champion.”

“A well-salted pretzel fresh out of the oven.”

“Hitchhiker’s Guide to the Galaxy. Or maybe Neuromancer. No, wait, it’s Snow Crash. Or was it American Gods? The Dark Tower cycle? A Song of Fire and Ice? Ugh. Maybe we should skip this question…”