The American Red Cross and Women Volunteers in the Great War

The American Red Cross was officially incorporated in 1905 with the President of the United States as its head. In his book The American Red Cross in the Great War, Henry P. Davison describes how the organization struggled to obtain enough public funding for supplies to ship to allied countries in the first years of the war. In 1917, however, President Woodrow Wilson appealed for greater participation from the American people: “It is for you to decide whether the most prosperous nation in the world will allow its national relief organization to keep up with its work or withdraw from a field where there exists the greatest need ever recorded in history.” He organized a war council for the American National Red Cross and appointed Davidson, a Wall Street banker, as chair. The council launched a public campaign that raised over $115 million in its first year.

In response to General Pershing’s plea to “buck up the French,” $1.5 million was donated to the French Red Cross by the ANRC, who also established hospitals and dispensaries. The organization placed 10,000 Belgian orphans with families in Holland and gave assistance to 300,000 Italian families. Russian children were kept from starvation thanks to shipments of 450,000 cans of condensed milk, and 1,200 stranded children were rescued by the ANRC in the Urals. 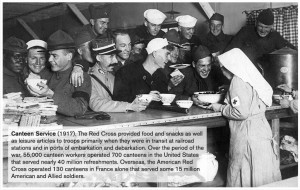 More than 8 million American women volunteers packed and shipped surgical dressings and other hospital supplies, as well as socks, sweaters and other items for soldiers and sailors. Of the women who volunteered overseas, 12,000 participated in the motor services, transporting the wounded to hospitals, nurses and doctors to work, and supplies to sites where they were needed. Other women staffed mobile canteens to provide coffee, doughnuts and a bit of cheer to the servicemen. 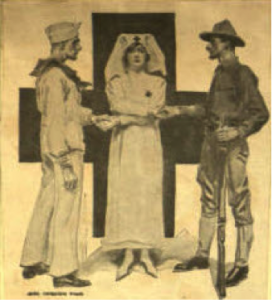 Not satisfied with the prospect of life as a Main Line socialite, Alma A. Clarke* set off alone for France just before the outbreak of the Great War. 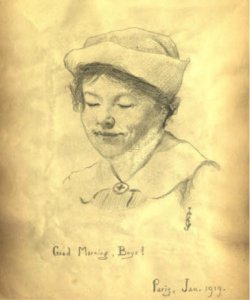 After training with the Red Cross, she served as an auxiliary nurse at the American military hospital at Neuilly-sur-Seine, near Paris. Clarke compiled two scrapbooks filled with mementos of her time in France. In one scrapbook she invited wounded servicemen to record their name and regimental information, the nature of their injury and the battle zone where it was acquired. Some of the men added expressions of gratitude for the care received, brief remembrances of fallen comrades and even sketches. Clarke eventually adopted three orphans and raised them in the U.S. 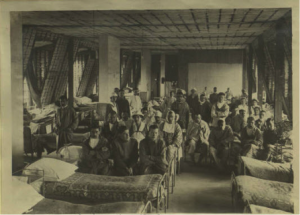 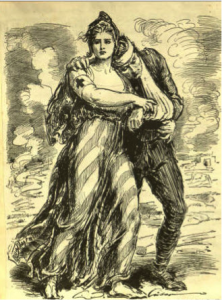 *This text regarding Alma A. Clarke previously appeared on the website Home Before the Leaves Fall.