Ever wonder how your favorite librarians and library staff soak up information in their everyday lives? Wonder no longer! Today, in the second of a series of link-laden, resource-ridden micro-interviews with a series of smart people, Programming and Outreach intern Kallie Stahl talks about the internet as a platform for fan communities. 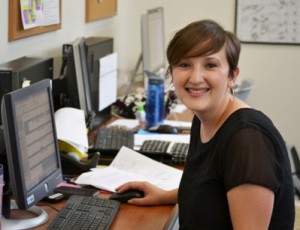 Who are you?
I’m Kallie, the Programming and Outreach intern at Falvey Memorial Library, and a graduate student of communication,

Where do you get your news (current events and/or personal interests)?
I have the CNN World News app … the ESPN app for all my sports. If I’m up in the morning I’ll watch Headline News, cable news. I don’t sit down and actually watch the local news or world news. If I’m home on Fridays, which I’m usually not, I’ll watch On the Road with Steve Hartman. He does touching, uplifting news stories.  I’m old-school though – I’d rather read the newspaper.

So, your desk’s convenient proximity to my desk has given me the inside scoop on your geekier side. What was your undergraduate research project?
It was titled Frenzy of Fans: An Examination of the Current Television Fan. I studied in particular the Firefly fandom and how they went about getting Fox to make a feature film out of a canceled television program. I looked into how active they are, the power they hold. 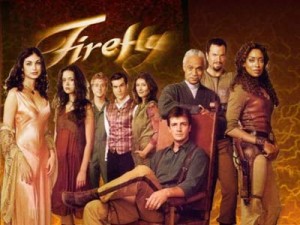 And how would you define fandom?
I classify people in three levels: they’re a viewer, a fan, or a fanatic. These levels of analysis are based upon Lawrence Grossberg’s categories of investment. A viewer is someone whose pleasure of that artifact extends only through the medium, so they just watch a show on television. They don’t do anything else. A fan is someone who takes it the next step further. They’re the ones who watch TV every week, maybe check out spoilers, own paraphernalia – things that extend beyond the medium. They maybe follow the actor on Twitter or Facebook. A fanatic is the next step further, so they’re gonna watch the program every week, they’re going to create fansites. They’re the ones who are going to be writing fanfiction. Some fans might read, they might not write it, but the fanatic will write fanfiction. They’ll know lines by heart. They’ll know everything about that show as it extends beyond the medium. They’ll live their lives through that show. There are also different levels between each group.

How do you use the Internet in terms of fandom?
I am on tumblr a lot. I look at Reddit. I visit a lot of spoilers sites because I’m a spoiler junkie. I need to know what’s happening with my favorite shows, and I need to know it now. I’ll look on fansites.

Do you have a favorite app?
My most useful app is the PNC bank app. The SportsCenter app is on the list.

iOS, Android, or other?
iOS.