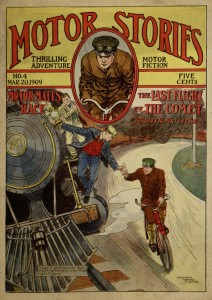 Hot on the heels of Motor Matt’s “Century” Run comes another issue of Motor Stories: Motor Matt’s Race; or, The Last Flight of the Comet. In this adventure, the series’ conflicted view of race is brought to the fore: the plot revolves around Matt’s part-Native American friend Tom Clipperton being wrongfully accused of a crime. He is unwilling to present evidence that could save him because it would further expose him to the community’s racism; he also takes a fatalistic view due to the all-white jury. At the same time, Tom himself readily uses slurs against other races, and the book itself portrays other Native Americans in as offensively stereotypical a way as it possibly could. All of this makes the book an interesting (and sometimes disconcerting) sociological study.

Following the main story, the book contains some filler material that further emphasizes that this is a product of a different time: an article about strange fish found near Cape Cod (including an obscure creature called the “horse-mackerel” or “tuna” that is sometimes eaten overseas) and an explanation of how fireflies generate light using vacuums and the ether.

The whole book can be read online or downloaded from Project Gutenberg.