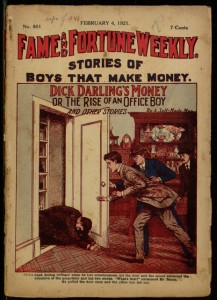 The “boy’s success story” genre made up a relatively small but significant percentage of the dime novel and story paper universe. Within this genre, the long-running Fame and Fortune Weekly was one of the most notable titles. Our latest eBook release through Distributed Proofreaders is one of the later issues of this publication, no. 801, from February 4, 1921.

The bulk of each issue of Fame and Fortune was devoted to a short novel. This issue’s offering is Dick Darling’s Money; or, The Rise of an Office Boy. While some of the success fiction of the time was often designed to inspire its readers to better behavior — and, indeed, the hero of this tale is a nice guy who is richly rewarded — the actual narrative shows little direct correlation between good behavior and financial benefits. Instead, in true dime novel fashion, a series of random incidents occur, culminating with Dick Darling becoming rich, not because of his skill or personality, but by sheer dumb luck. This ending is foreshadowed through encounters with a gypsy fortune-teller (perhaps not the sort of Fortune usually alluded to by the periodical’s title). Interestingly, the story’s portrayal of gypsies, while highly stereotypical, is at the same time surprisingly positive. 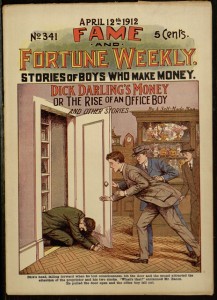 The rest of the issue is filled out with an astonishingly brief serial installment, a short story, capsule articles of unusual news (such as a discussion of a school where conflicts are resolved through teacher-moderated fist-fights), and many advertisements (one of which features a product that rather shockingly promotes itself to children by encouraging them to play pranks on people of other races).

The whole issue can be read online or downloaded through Project Gutenberg. Readers might also be interested in seeing the original page images in our Digital Library or in comparing this issue to Fame and Fortune Weekly no. 341, which features a more colorful cover and includes an earlier appearance of Dick Darling’s Money in a slightly longer form.