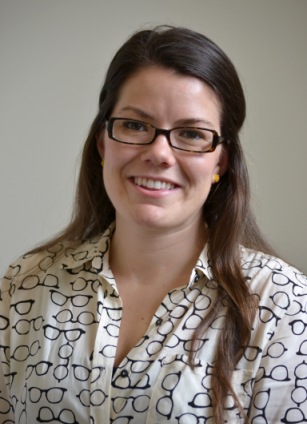 Laura Matthews recently joined the Scholarly Outreach team as a “library events and outreach specialist.” She reports to Regina (Gina) Duffy, Rebecca (Becky) Whidden while Duffy is on leave and Darren Poley, team leader. She is responsible for assisting in the scheduling and setting up for events held in the Library.

Matthews, a native of Wayne, graduated from Shippensburg University, where she received a BSBA degree in marketing and international studies. She also has a post-baccalaureate certificate in pre-speech language pathology from LaSalle University. Before coming to Falvey, Matthews worked at Elwyn SEEDS (Special Education for Early Development).

Her special interest is raising dogs for The Seeing Eye. Her current puppy is named Nova, “a complete coincidence,” she says. “I found out about The Seeing Eye at the Special Olympics here at Villanova about four years ago. After talking to other members of the club and meeting the pups, I attended my first club meeting and I was hooked! I raised my first pup a year later.”

“I am excited to be working at Villanova,” Matthews adds.