In Honor of the Birthday of Our Lady, Sept. 8 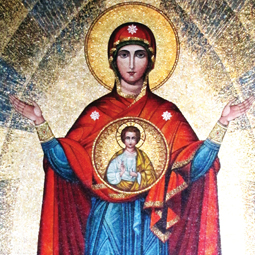 You are honored more than the Cherubim,
And you have more glory, when compared, to the Seraphim;
You, without corruption, Did bear God, the Logos;
You are the Theotokos; You do we magnify.

Higher than the heavens above are you,
And you are much purer than the radiance of the sun;
You who have redeemed us from the curse which is upon us;
The Lady of all people, in hymns, do we honor you.

From the great multitude of my sins, ill am I in body, ill am I also in my soul;
I am fleeing to you, the one who is all-blessed,
The hope of all the hopeless,
Please come bring help to me.

Lady and the Mother of Him who saves,
Receive the supplications of the lowly who pray to you;
Mediate between us and the One you brought forth;
O Lady of all people, intercede for us.

More than a beautiful piece of ancient poetry translated into English, the above is a hymn of magnification (a megalynarion) to the Blessed Virgin Mary, which incorporates a prayer of earnest and humble request to her as the Mother of God. This liturgical ode to Our Lady is slightly modified in the Office of Consolation in the Byzantine Catholic tradition, a tradition which is an Eastern rite of the Catholic Church.

Although broken into stanzas above, the Megalynarion is sung as a whole in the service of Paraklesis in Eastern Orthodox churches. A beautiful recording of this prayer of supplication to the Theotokos is performed by Eikona on “PARAKLESIS – The Mother of Light.”

The first two stanzas are the  Ἄξιον ἐστίν = Axion estin (in Greek) or Достóйно éсть = Dostóino yesť (in Slavonic), a classic theotokion; a hymn-prayer to the Theotokos, Mary, Mother of God. For more on this title for Mary, read “Mary the Theotokos (‘Birth-Giver of God’),” Dr. Mary B. Cunningham’s chapter in the collection of essays entitled The Orthodox Christian World, p. 189 ff.

The first part of the Axion estin (the first stanza above) is a troparion revealed AD 980 by the Archangel Gabriel to a monk on Mount Athos. (“Mt. Athos is the monastic republic on the Chalkidiki Peninsula in Greece. It is in many respects the spiritual heart of the Orthodox world.” Clark Carlton, The Truth: What every Roman Catholic Should Know About the Orthodox Church, p. 15.) An older sticheron (the second stanza above and the second half of the Axion estin) was originally composed ca. AD 750 in honor of the Theotokos by Saint Cosmas of Jerusalem, the 8th cen. hymnographer, and Bishop of Maiuma the ancient port city of Gaza.

The remaining three stanzas are from the “Canon of Supplication to the Most Holy Theotokos” (aka, the Little Paraklesis), which originated with Theophanes of Nicaea who died AD 818 (and who is also remembered as Theophanes the Confessor). He is quoted as having written, “It cannot happen that anyone, of angels or of men, can come otherwise, in any way whatsoever, to participation in the divine gifts flowing from what has been divinely assumed, from the Son of God, save through his Mother” (Michael O’Carroll, Theotokos; a theological encyclopedia of the Blessed Virgin Mary, p. 241).

The understanding of the Virgin Mary as Mother and Mediatress is further developed in the West by authors such as St. Louis-Marie Grignion de Montfort (in the 17th century). In fact her role in salvation history, the maternal love of the Blessed Virgin Mary, and her spiritual maternity to the all the faithful was fully recognized by the fathers of the Second Vatican Council (cf., Chapter 8 of Lumen Gentium), and in the writings of many popes before and after Vatican II.

Pope Paul VI in the 20th century wrote, “The Blessed Virgin’s role as Mother leads the People of God to turn with filial confidence to her who is ever ready to listen with a mother’s affection and efficacious assistance” (Marialis Cultus §57) in an apostolic exhortation “For the Right Ordering and Development of Devotion to the Blessed Virgin Mary,” which is included in the United States Conference of Catholic Bishops publication Mary in the church[remove extra spave]: a selection of teaching documents.

St. Pope John Paul II, in the late 20th century, spoke often of the Mother of God (see Mary, God’s yes to man : Pope John Paul II Encyclical letter, Mother of the redeemer, and  Theotókos : woman, mother, disciple). Pope Benedict XVI, in the early 21st century, wrote in his first encyclical letter God is Love, “Mary has truly become the Mother of all believers. Men and women of every time and place have recourse to her motherly kindness and her virginal purity and grace, in all their needs and aspirations, their joys and sorrows, their moments of loneliness and their common endeavours. They constantly experience the gift of her goodness and the unfailing love which she pours out from the depths of her heart. The testimonials of gratitude, offered to her from every continent and culture, are a recognition of that pure love which is not self- seeking but simply benevolent” (Deus Caritas Est §42).

For a good introduction to the Byzantine Catholic tradition overall, see the DVD, “An Introduction to the Eastern Catholic Church.” Some useful books in the reference collection (on the Learning Commons in Falvey) that are good for exploring the Eastern Christian tradition are The Blackwell dictionary of Eastern Christianity, The encyclopedia of Eastern Orthodox Christianity, and Creeds & confessions of faith in the Christian tradition.