Panoramic image of the Atlantic entrance to the Panama Canal from the Library of Congress. (Click on image to enlarge.)

The Panama Canal celebrates its 100th anniversary this year. The 50-miles-long canal across the Isthmus of Panama officially opened on August 15, 1914, although a French crane boat, Alexandre La Valley, had already traveled the Canal’s full length from the Atlantic to the Pacific Oceans, completing its journey on January 7, 1914. However, the Alexandre La Valley had traversed the Canal in stages during the Canal’s construction. On August 4 the SS Cristobal, cargo steam ship, made a test run through the Canal.

Sadly, the official opening held on August 15 was overshadowed by Germany’s invasion of Belgium on August 4, followed by Great Britain declaring war that evening. The grand celebration planned to mark the completion of the most expensive construction project funded by the United States became a modest, local event. No international dignitaries attended the ceremony. 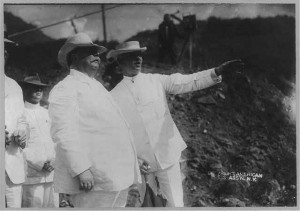 The first civil governor of the Canal Zone, Major George Washington Goethals (1858-1928), who had served as the chief engineer for the Canal (1907-1914), observed the passage of the first ship through the Canal on opening day. Bellisario Porras, the president of Panama also attended the opening. A steamship, the SS Ancon, used by the Panama Railway to carry supplies for the Canal’s construction, made the first official transit of the Panama Canal on the opening day; Captain John A. Constantine piloted the SS Ancon’s passage through the Canal. The Ancon’s captain was G.E. Sukeforth. The toll charged the SS Ancon for its use of the Canal was 90 cents per cargo ton. 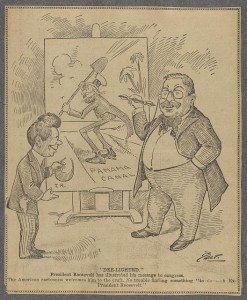 In 1901 President Theodore Roosevelt had declared the need for a canal in Central America to join the Atlantic and Pacific Oceans. He was not the first American president to see the need for a canal. In 1869 Ulysses S. Grant created the Inter-Oceanic Canal Commission and sent an expedition to explore possible routes for a canal. However, Grant’s hopes were not realized. Even earlier, in 1839, an anonymous author wrote two articles published in The Democratic Review advocating the construction of a “Ship Canal to connect the Atlantic and Pacific Oceans.”

On November 18, 1903, the United States signed the Hay-Bunau-Varilla Treaty (Canal Treaty) in Panama; the treaty gave the U.S. the right to build a canal in return for an annual payment of $250,000. In June 1904 the Americans began their construction and the Panama Canal was completed in 1914, two years ahead of schedule.

Construction of the Panama Canal cost the United States about $375 million dollars. Of this, $10 million was paid to Panama and $40 million paid to the French company, Compagnie Nouvelle, which had begun construction of the Canal in 1879. In 1915, the year after construction was completed, the Panama Canal earned approximately $4 million in tolls. The building of the Canal under American administration cost about 5,600 lives, although the majority of these were not Americans. 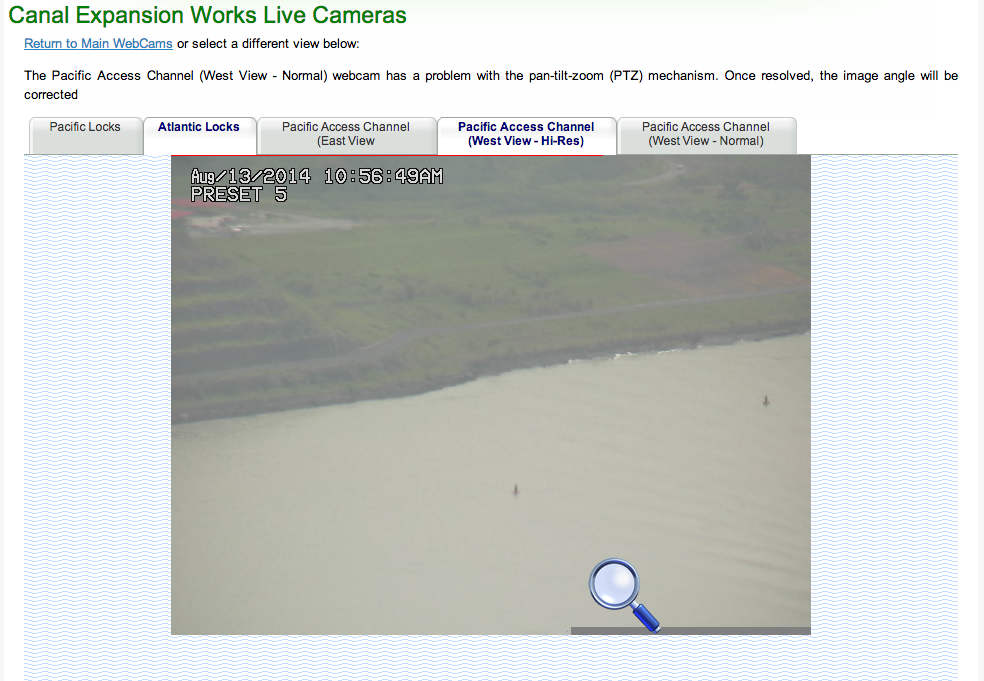 Don’t miss the various live webcams from the Panama Canal

It takes eight to ten hours for a ship to travel the length of the Canal, and about three of those hours are spent going through its locks. (According to dictionary.com, a lock is “an enclosed chamber in a canal … with gates at each end, for raising or lowering vessels from one level to another by admitting or releasing water.”)

Tolls are determined by the size and weight of the ship and its cargo capacity or, for passenger ships, by the number of berths. For current tolls see www.pancanal.com. Since the 1970s many cargo ships have become too large to use the Canal, and beginning around 2001 suggestions were made to expand the Canal. In 2007 construction began, dredging the existing canal and constructing additional larger locks. The project is expected to be completed in 2015 at a cost of $5.25 million dollars.

In 1977 President Jimmy Carter signed a treaty giving the Canal to Panama. Under Panama’s ACP, the state-owned agency, tolls have increased, traffic through the Canal has grown and service has improved.

Center of Military History. The Panama Canal: An Army’s Enterprise (2009)

Panama’s Canal: What Happens When the United States Gives a Small Country What It Wants. (1998)

Panama Fever: The Epic Story of One of the Greatest Human Achievements of All Time – The Building of the Panama Canal. (2007)

“Two Articles on the Projected Ship Canal to Connect the Atlantic and Pacific Oceans.” Reprinted from The Democratic Review for October and November, 1839. Washington, 1839.

Expansion of the Canal:

“The Panama Canal: A Plan to Unlock Prosperity.” The Economist, 03 December 2009.