Jersey Week: How many "greatest hits" of these Jersey Boys have you read?

This week the Library News blog will be highlighting everyone’s second favorite mid-Atlantic state, New Jersey! So grab your flip flops and head east with us each day this week. 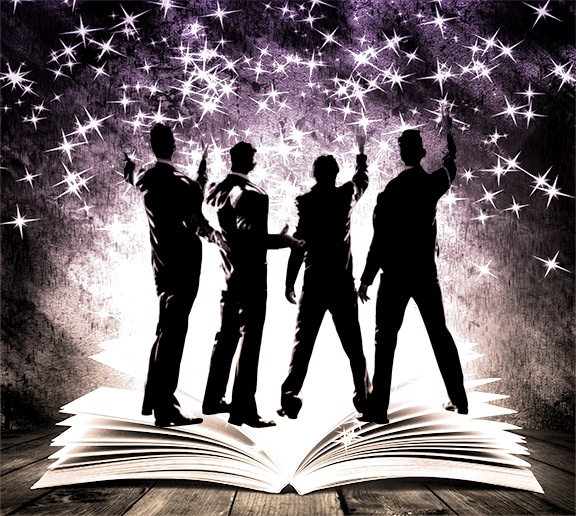 Do you know the Greatest Hits of these Jersey Boys?

Everyone’s talking about “Jersey Boys,” despite the somewhat universal panning reviewers are giving to the theatrical adaptation of the Broadway musical of the story of Frankie Valli and the Four Seasons.

Even at an academic library, we’ve got Jersey Boys of our own. From north to south and past to present, the Garden State has provided fodder for some of America’s most treasured male authors. We’ve assembled about a dozen for you to choose from below. Click on the author’s name to be led directly to their works in VUFind, our catalog. You will find many works on our shelves. Those that are not on site are easily located within a day or two by using our E-ZBorrow system, which gives you access to over 35 million volumes from academic and public libraries in the mid-Atlantic region. Like the tasty treats behind the counter at Carlo’s Bake Shop in Hoboken, you’re sure to find something you like!

Stephen Crane
Born in 1871 in Newark, Crane was sickly most of his life and as a writer was drawn to capturing the trials of those living in impoverished conditions. His disappointment in sterile accounts of the Civil War led him to wonder how soldiers felt in the trenches, imaginings which led to his most prominent work, The Red Badge of Courage.

Harlan Coben
Also born in Newark, Coben is a darling with the crime novel set, with over 60 million books in print. His last seven novels debuted at #1 on the New York Times bestseller list. He is the first author to win an Edgar, a Shamus and an Anthony award. His popular series novels, based on fictional sports agent Myron Bolitar, have recently been expanded to a young adult series about Myron’s nephew, Mickey.

Allen Ginsburg
Another Newark resident, Ginsberg is a leading figure in the 1950s counterculture “Beat” movement. Best known for his poem “Howl” which denounces capitalism and conformity in the United States, Ginsberg drew inspiration from the free verse style of another New Jersey resident, Walt Whitman. Outrageous and controversial, he developed his own style that can only be called “Ginsbergian.”

James Fenimore Cooper
Cooper was born in Burlington in 1789. He served in the Navy as a midshipman which greatly influenced his sea-faring stories and the Leatherstocking Tales, a series of five novels featuring Natty Bumppo, a white child raised by Native Americans. The Last of the Mohicans is considered his masterpiece, and is the second title in the Leatherstocking series.

Norman Mailer
Mailer, born in Long Branch, N.J. in 1923, is considered an innovator of creative non-fiction, who, along with contemporaries such as Hunter S. Thompson, Truman Capote and Tom Wolfe, developed “New Journalism.” Novelist, journalist, essayist, playwright, actor and political candidate, Mailer won two Pulitzer Prizes and the National Book Award. He wrote over 40 books, including 11 novels, and founded The Village Voice. He is most acclaimed for The Executioner’s Song and The Naked and the Dead, which is hailed as one of America’s best war novels.

Junot Diaz
Diaz was born in the Dominican Republic and raised in Parlin, New Jersey. He is the author of The Brief Wondrous Life of Oscar Wao, which won the 2008 Pulitzer Prize, and This Is How You Lose Her, a finalist for the National Book Award. Diaz is a graduate of Rutgers, the State University of New Jersey, and appeared at the Villanova Literary Festival in April 2013.

Philip Roth
Must be something in the water in Newark! Also born there in 1933, Roth is known for his irreverent, semi-autobiographical portrayals of Jewish life. Best known for Portnoy’s Complaint and  Goodbye, Columbus, Roth wrote approximately 40 books, and is one of the most award winning writers of his generation.

Joyce Kilmer
Anyone who’s traveled north on the New Jersey Turnpike towards New Brunswick may be familiar with the Joyce Kilmer rest stop – but may not realize that Joyce is actually a “Jersey Boy.” And, of course, anyone familiar with classic American poetry knows the iconic – and often parodied Kilmer line, “I think that I shall never see A poem lovely as a tree …”

Theophilus Gould Steward
This author, educator, clergyman and son of free blacks was born in 1843 and received his formal education in Gouldstown, N.J. Steward joined the 25th U.S. Colored Infantry and served as its chaplain. He was a professor at Wilberforce University and wrote eight books.

George R. R. Martin
Martin, best known for A Song of Ice and Fire, the international bestselling series of novel on which the HBO series “Game of Thrones” was based, was born in Bayonne in 1948. He’s a novelist, screenwriter, short story writer and co-executive producer of the popular television series. A Song of Ice and Fire which is intended to be a series of seven novels, with two still in planning stage. Martin said that the series was inspired by Wars of the Roses and Ivanhoe.

Peter Benchley
Benchley, who lived in Princeton, N.J., wrote Jaws in 1974, still considered by many (and by “many,” I include myself) the best beach read ever. “Jaws” the movie (Benchley was its screenwriter) was the first film to gross over $100 million dollars, creating the summer blockbuster phenomenon. Benchley went on to write several more nautical thrillers, but mostly devoted himself in later years to (re)educating a post-Jaws audience about the beauty and mystery of the sea, including a new understanding of sharks as the oppressed, not the oppressor. With great white shark sightings already in the news this summer (or is it great white hype?)

With this myriad of choices, we know you’ll soon be – as Frankie says – Beggin’ to get your hands on some of these great reads.