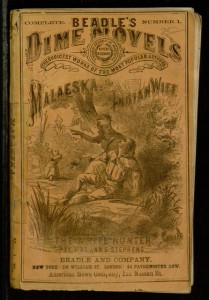 Shortly before the Civil War broke out, the publisher Beadle and Company (later Beadle and Adams) tried a publishing experiment: sell short novels for ten cents, providing inexpensive entertainment for the masses. This experiment proved to be incredibly successful, and thus the “dime novel” was popularized.

The very first story released as a Beadle’s Dime Novel was Malaeska: The Indian Wife of the White Hunter, written by Mrs. Ann S. Stephens, an author who would continue to contribute to the series in years to come. This debut title is now available in electronic format through Project Gutenberg thanks to our work with the Distributed Proofreaders project.

Malaeska is definitely not what one might expect from the first dime novel — it does not set the template for what would follow. While there are some action sequences here and there, the overall tone of the book is nostalgic and mournful, filled with long descriptions of natural scenes and authorial asides on the “good old days” before the tiresome modernity of 1860.

It is also surprising that the subject of this initial experiment in popular literature is not frontier adventure, lost treasure, high romance or another crowd-pleasing standard but rather interracial marriage, a subject that was definitely not considered to be a positive thing in the 19th century. Needless to say, many of the attitudes and some of the language presented by the book have not aged well, though it is perhaps to the book’s credit that it is written ambiguously enough that the reader can choose to interpret it either as a cautionary tale against violating societal norms (perhaps, though not necessarily, the original intent) or as a condemnation of the senselessness of prejudice (a more satisfying modern reading).

To experience the story for yourself and make up your own mind about its significance, you can read the full text online or download it for your e-reader at Project Gutenberg.