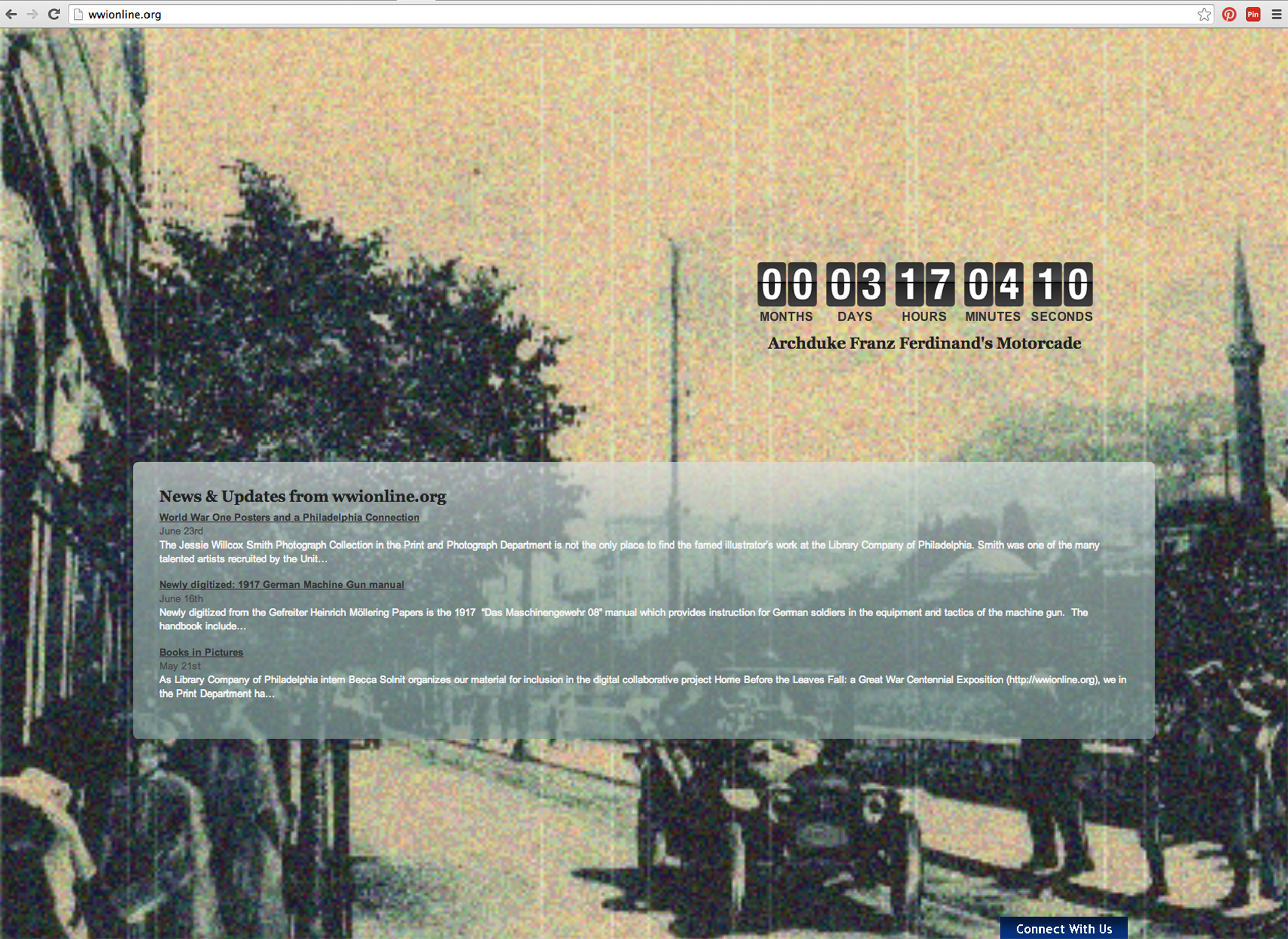 “Home Before the Leaves Fall: A Great War Centennial Exposition,” an online exhibit, will be launched Thursday evening, June 26, at the Historical Society of Pennsylvania. The event is free and open to the public, but registration is required. Peter John Williams—an attorney, an amateur historian with a special interest in World War I, and a life-long Philadelphia resident—will speak on life in Philadelphia during World War I (1914-1919). Williams is the author of Philadelphia: The World War I Years. Both digital and physical materials will be on display at the launch and reception.

Villanova University, Historical Society of Pennsylvania, American Philosophical Society, Chemical Heritage Foundation, College of Physicians, Library Company of Philadelphia and Swarthmore College are current participants in the exhibit, which commemorates the centennial of World War I. The exhibit highlights little-known primary and secondary sources held by various institutions in the Delaware Valley region.

Michael Foight, Special Collections and Digital Library coordinator, says “[T]his sprang out of an initial collaboration with the Historical Society of Pennsylvania, with Villanova’s Special Collections and Digital Library team as the coordinators and hosts of this project. A large and growing number of institutions in the Mid-Atlantic currently contribute content as well as a number of academically affiliated and independent scholars and researchers, including several Villanova University faculty and graduate students.”

Foight explains, “The goals over the next four years include to prioritize digitization of little-known primary and secondary sources on the Great War held by institutions in the mid-Atlantic and to share descriptions of held content for both the public and the scholarly community. The website itself will host a set of curated shorter articles authored with illustrations drawn largely from this newly available content. A number of Digital Humanities projects, including an independent crowd-sourced genealogical data collection and mapping of the Great War dead of Philadelphia, will be worked on with the scholars involved in the exhibition.”

The Historical Society of Pennsylvania explains that the website will contain images, memoirs, diaries, periodicals, “contextual essays, news of commemorative events, interactive data, and geographical information system (GIS) mapping. The project aims to promote the use of these materials to students, scholars and the public, and to commemorate the services and sacrifices of soldiers and civilians a hundred years ago.”