eBook available: Motor Matt; or, The King of the Wheel 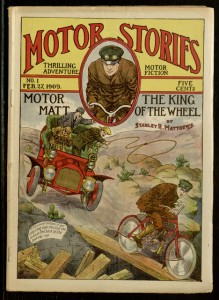 Last year, we reintroduced the heroic Motor Matt to the world by digitizing the complete series of Motor Stories dime novels. Today, the first of those adventures has been formatted into a convenient-to-read eBook with the help of the Distributed Proofreaders project.

Motor Matt; or, The King of the Wheel is an interesting beginning to the series. Published in 1909, at a time when dime novels were nearing the end of their reign, the story shows a very conscious effort to present itself as something new and modern within a tired and aging genre.

The story is almost certainly modeled on the incredibly popular adventures of Frank Merriwell first published in Tip-Top Weekly, with a focus on the athletic and social adventures of high school boys. However, a strong emphasis on technology sets it apart. Not only is the adventure largely centered on Motor Matt’s efforts to obtain his first motorcycle, but it also features wireless communication as an integral part of the plot.

In addition to emphasizing then-cutting-edge technology, the book also seems to look disparagingly on some past dime novel tropes. Comic relief is presented in the form of Welcome Perkins, an elderly, one-legged man with a broken gun who may or may not be a reformed outlaw. He frequently offers outbursts like this one:

“It’s plumb good for a ole outlaw like me to grip a honest pa’m. It helps to make me fergit what I was and to brace up an’ be what I ort. I’m a horrible example o’ what happens to a man when he cuts loose in his youth an’ bloom an’ terrorizes all outdoors—but I can’t begin to tell ye how pacifyin’ to my reckless natur’ is the grip of a honest hand.”

The outlaw who tries to reform his wild nature is a common theme in dime novels, typified by the adventures of Deadwood Dick, but here it is rendered intentionally ridiculous.

Also quite interesting is the Native American character portrayed here. Needless to say, “Indians” are frequently used as villains or insultingly-portrayed sidekicks in the dime novel universe, but here we are given Tom Clipperton, a character who initially poses a threat to Matt not because of his race but rather because of bitterness over the racism shown him by others, including one of Matt’s friends.

Before anyone gets too excited about how progressive this book is, it should be noted that the tale still has its moments of political incorrectness, and the filler story at the end about an African tiger hunt is downright cringe-inducing. Nonetheless, Motor Matt’s debut is a fun and readable adventure that serves as a document of changing times early in the 20th century, and as such, it’s worth a look.

The entire book can be read online or downloaded in a variety of popular eBook formats at Project Gutenberg.