A Familiar Face Is Missing 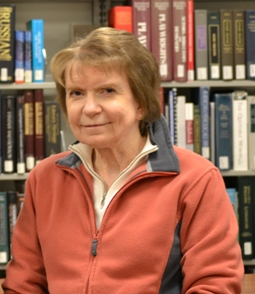 Donna came to Falvey in 1988 as a part-time employee, working in Technical Services where she labeled books and filed catalog records. In 1991 she became a full-time employee, first working in acquisitions and then cataloguing. When an information desk was established as part of the first floor renovation in 2004, she helped staff it, while assisting with interlibrary loan borrowing and circulation tasks.

When asked about changes she has seen during her years at Falvey, Donna replied, “I have worked with three different directors [Mary Ann Griffin, James L. Mullins and Joseph Lucia], each of whom had his or her own style of running the Library. There were several renovations to Falvey during their tenures. Technical Services (now Technology Development) and Resource Management was moved from the main floor to its present ground-floor location. A small coffee shop was installed in the basement [outside what is now the Resource Management Center], then expanded into its present location on the main floor. The Information Desk, Speaker’s Corner and Learning Commons didn’t exist when I came to Falvey. A large reference desk was located on the first floor and librarians’ offices were also on that floor. The campus road was fully open to vehicular traffic, which was heavy all day and sometimes reminded me of a major highway, especially because of the truck traffic that went through. … Mendel, the Law School, Bartley and Driscoll were renovated or rebuilt after I came.”

“What did you find most interesting?” I asked Donna. “Within the Library, I enjoyed working at the Information Desk because every day was different by virtue of the nature of the job. The patrons were different every day, and one never knew what question would come up next. Some questions were mundane, but others were more difficult; and while working at that location, I often learned something new every day myself!” she said.

Donna’s retirement plans include “reading a large number of books that I’ve collected over the years.” In addition to tackling several long overdue household projects, Donna will also continue participating in online projects with the Cornell Lab of Ornithology, volunteer at two local shelters that rescue homeless animals; and become more involved with a local conservation organization. In her spare time she also looks forward to spending more time gardening, traveling to favorite places, and walking her dogs.