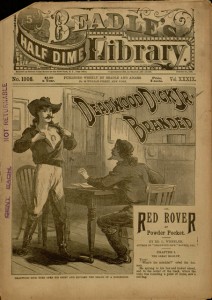 The latest eBook to come out of the Distributed Proofreaders project using content from the Digital Library is Deadwood Dick Jr. Branded; or, Red Rover at Powder Pocket, a dime novel first published in 1896.

Some of the usual dime novel standbys can be found here — gun fights, outlandish disguises, etc. — but a surprising amount of space is devoted to lengthy debates about matters of honor. This talkiness means that this is hardly the most exciting tale to be found in the dime novel universe, but it is an interesting portrait of a particular idealized vision of the Wild West.

The full book can be read online or downloaded in a variety of popular electronic formats at Project Gutenberg.