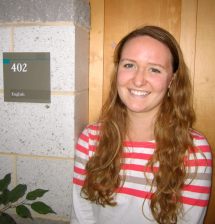 “Every day leading up to the party was a knockout. Clear skies, sun so bright you basically had to look down at your feet, and zero humidity. You had played in the sprinkler for hours (you didn’t have a pool like the rest of your neighbors) until Mom curled her finger at you to come inside and explain that “Eileen, we’re in a drought, OK? That means no extra water and we’re not supposed to use the sprinkler on the grass so let’s not dance around and draw attention to it, sweetie.”

But the day of the Fourth of July party was not a knockout, no siree. You couldn’t sleep the night before because you were so excited and also the thunderclaps felt like they were in your chest, or right next to the bed like a mean bully kid from school clapping his hands in your ear. Well, that thunder didn’t let up the whole morning and all through the day. You were disappointed because there were supposed to be games outside but when you saw your Pop’s face so sad and long, you forgot about the games and climbed onto his lap. He let you stay there for breakfast as he ate his Cheerios mixed with Cap’n Crunch, sipping his coffee which always made you queasy and looking out the window at the rain.”

Mary Grace Mangano, a Class of 2014 Creative Writing Awards contestant, says “I’ve heard that the most imaginative space is the moment when a person wakes, somewhat startled to find herself in a new day. Maybe this is because all of the scattered thoughts a person has while sleeping and dreaming remain on the surface and introduce themselves. Writing–especially poems–seems to happen like this for me. It will start with a thought, feeling, or idea that presents itself to me and the more I sit with it, the more I want to say something about it. The writing itself is a way to explore that flash of an idea, to find a way to say what I’m feeling or thinking. In a way, the poetry is being able to find a moment to explore these ideas and share it with words, on the page, to other people.”

Mary Grace Mangano is an English major seeking an honors degree with a concentration in writing and rhetoric and an Italian minor. She is from Clinton, New Jersey, has enjoyed creative writing since she was a young girl, and also loves to run, dance, cook, read and travel.