eBook available: The Wonder of War on Land 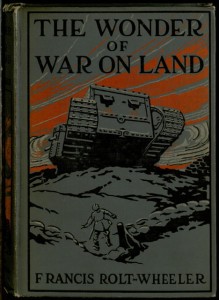 Our third World War I-themed children’s novel (following The Liberty Girl and The Brighton Boys in the Trenches) is now available in eBook format thanks to our collaboration with the Distributed Proofreaders project.

This book, Francis Rolt-Wheeler’s The Wonder of War on Land, is quite an unusual creation. It is a novel about a young American boy who witnesses German attacks on Belgium early in the war and becomes increasingly involved in the unfolding conflict. In spite of its fictional nature, it looks like a work of non-fiction, illustrated throughout with photographs (often unrelated to the text) and making fairly heavy use of footnotes (sometimes to cite sources of anecdotes shared by characters, sometimes to indicate places where events have been presented out of historical order).

The actual text of the story is just as unusual as its formatting. After an introduction proclaiming the author’s desire “[t]o give the boys of the United States a fair viewpoint on this war,” the reader is presented with the novel itself, a strange mix of lengthy didactic monologues, pro-French/anti-German propaganda, bizarre incidents, surprisingly unrestrained violence, and periodic hints of the supernatural. By the time our hero is fleeing Belgium in the company of a friendly hunchback and a caged eagle which he captured in hand-to-wing combat as a symbol of victory, it is clear that this is not quite the typical war novel.

The book never quite seems to know what it wants to be — a textbook, an inspirational adventure novel, a document of the horrors of war — and so it never quite meshes into a satisfying whole. However, the fact that it is such an odd hodge-podge makes it an interesting study, and the unusual biography of the author may serve to shed some light on its eccentricities.

If you wish to see the whole thing for yourself, the book can be read online or downloaded in various popular eBook formats through Project Gutenberg.