This year Shakespeare turns 450, and people will be celebrating all around the globe from Shakespeare’s hometown of Stratford upon Avon (where the tradition of celebrating his birthday goes back over 200 years) to Paris to right here in Falvey Memorial Library. 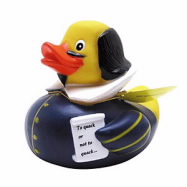 This year Falvey is providing several opportunities for those interested to celebrate Shakespeare’s birthday. First, visit the Shakespeare display up on Falvey’s 4th floor, near the Shakespeare collection, and view items on display from Falvey’s Special Collections. Second, participate in our Shakespeare scavenger hunt for a chance to win a Shakespeare duck. Rules of participation and clues for the scavenger hunt can be found at the 4th floor display. Last, but certainly not least, join us in the Falvey Hall Reading Room on April 23 at 6 p.m. to celebrate with the Villanova Department of English, ACS, and the Library. There will be games, prizes, skits performed by students, and birthday cake!

Shakespeare wrote 38 plays (some in collaboration with other playwrights), 154 sonnets and two narrative poems. Love them or hate them, Shakespeare’s stories have endured the test of time and continue to inspire people. Of course, many direct adaptations of Shakespeare exist in popular culture, such as Franco Zeffirelli’s 1968 “Romeo and Juliet,” Kenneth Branagh’s “Hamlet” or “Henry V,” and countless others.

Shakespeare was inspiring artists long before film was even invented. When you visit the Shakespeare display currently on Falvey Memorial Library’s fourth floor, you will notice one or more of the twelve large sized prints which have been placed around the Shakespeare section. These prints are from volume 1 of The American edition of Boydell’s illustrations of the dramatic works of Shakespeare, by the most eminent artists of Great Britain. Published in 1791 and again in 1805, this collection of prints is bound in a large-format book known as an elephant folio due to its large size (22 by 28 inches). Original prints from the first editions of the book now go for $300-$950 each and are beautifully detailed depictions of scenes from Shakespeare’s plays. The prints hanging in the Library are copies, but the actual book the images were scanned from is held in Falvey’s Special Collections, and anyone is welcome to make an appointment to see it.