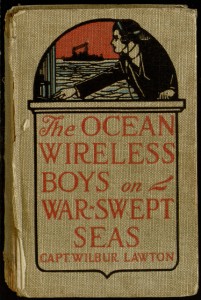 Like our previous Distributed Proofreaders project, The Boy Aviators with the Air Raiders, our latest title, The Ocean Wireless Boys on War Swept Seas, is a World War I adventure story aimed at young readers and written by Captain Wilbur Lawton (actually a pseudonym of journalist John Henry Goldfrap). While Air Raiders was released before U.S. involvement in the conflict, War Swept Seas came out in 1917, closer to the end of the war. This title also marks the final volume in the Ocean Wireless Boys series, immediately following The Ocean Wireless Boys in the Pacific, which was made available in eBook format as a result of one of our earlier projects.

If you are interested in helping this concluding adventure join its predecessor in the electronic age, you can read this earlier post about how the process works, and then visit the project page to begin preparing pages for Project Gutenberg.