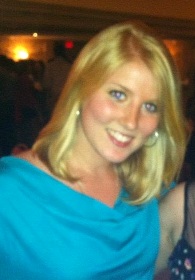 To honor the University’s Class of 2014 Creative Writing Awards, the Library is publishing contestants’ poems or prose excerpts on Falvey’s blog. The Library also has created posters for the contestants’ entries, which will be displayed throughout the library’s first floor.

“Do you have a history of mental illness or violent tendencies? Have you ever been convicted of a crime?”

Our medical clinic was half-way completed, and I silently wondered if they would take him there to be treated by the single nurse who sat in the single room all night long. I am white. I am American, and they sent me home without thinking about my clinic or our small stone house surrounded by a moat of glass but consumed by my sticky machete that cut more than a mango that night.

“Where did you get the knife? Why were you walking in the dark carrying a lethal weapon?”

It was just like the times before, it was dark and he treaded toward me, not even hiding his heavy approach. I was drunk and stoned and clutching two sweating chocolate milk cartons in one hand. It felt like I was swimming through the thick air that ached for monsoon season. He came from behind but I was ready this time. My shoulders tingled with effort as something hot dripped down the side of my leg. Later, I found a straight cut about the length of my pinky I made against my hip while pulling out the sticky mango machete, like one from a razor. I thought about Skokes and her ring of tears and her tired boots. I thought about Asia in the hamper, surrounded by a sea of her own dark red blood, looking like a vampire after a meal. I thought about the Twizzlers I had been on my way to retrieve, the Twizzlers not-Sesie’s girlfriend had sent me the day before. Flailing through the blackness, I made contact with flesh as Mat Kearney played in my head. Skin is tougher than you’d think and bones make a funny clinging sound when they meet metal, like a bell underwater. I heard a yell, but I don’t know if it was mine or his. It must’ve been mine, because the mob came running. And so did Sesie.

“How did you know the man you attacked? Where did you meet the people who came to your aid? Was this attack premeditated?”

That’s why I’m here. I like this place because I can hear the electricity crackling and there isn’t a machete on my hip. I am staying here to recover from that last night, but they don’t understand that it started with a sign that read “Luluu” and a glass ocean and a white sand beach. Here, I’m becoming not-Lulu, but they want me to remember being Lulu without being sad, so they feed me medicine to make my thoughts slow down. I think I should be in jail because they told me later that he died. They didn’t tell me that I killed him because they only found his charred body after the mob came. The mob that showers mwizi in gasoline, wraps them in a rubber tire and throws a torch at them. I said mwizi and mwizi is a death sentence—they put a tire around him and lit up the night.

Mary Lister, a Class of 2014 Creative Writing Awards contestant, says “This piece follows a group of young women through their journey and battles as volunteers in and East African city. I utilized my basic knowledge of Swahili to try and give an air of authenticity and I hope the story gives off a bit of thriller-esque drama—it’s meant to!”

Mary Lister is a senior Political Science and Honors major from West Chester, Pa. She likes piña coladas, getting caught in the rain and snuggling with her kitten named Cat while pretending she is a blond Audrey Hepburn.