Dr. Bailey’s students collected and analyzed data from primary and secondary sources to create a profile of a local community in the early 20th century: Villanova’s neighboring town of Ardmore, in this case. One goal of their research was to produce a website featuring profiles of some notable community members and an interactive map of Ardmore.

Bang describes the project as the first completed project for Aurelius. She notes that this is only the first phase and that subsequent classes will be able to add layers to the preexisting data and interactive map.

Uspal explains the technology behind the project as follows: Using image mapping, Uspal’s goal was to teach the students HTML, digital scanning and how to build a website. Of the 11 students who participated in the project, none had HTML experience or appreciable experience with scanning items and website creation. However, as the students became comfortable with the technology, they became more innovative. 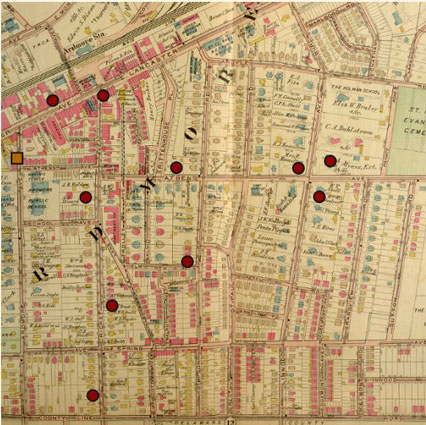 Dr. Bailey received his inspiration for the course in 2012 when he recognized his students’ need for greater experience using primary sources. At the time, Dr. Bailey’s research for the Friends of Linwood Park had impressed him with the rich source of material available. He decided to shift his focus to mid-1920s Ardmore, Pennsylvania, and engage his students in this real-world research opportunity. 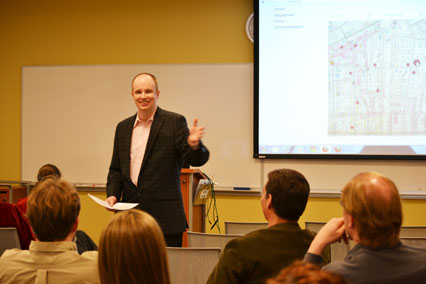 Each student was responsible for charting 200 individuals and writing a biography for one resident. The students also researched one organization, in this case the Ardmore YMCA. To do their research, the class used the Main Line Atlas from 1860-1926, census returns, the Ardmore Chronicle from 1904, the Philadelphia Inquirer and probate records. Dr. Bailey noted that a lot of advance preparation went into making the project a success. For instance, he visited Norristown ahead of time to confirm that wills could be found before sending students to do their research.

Masthead from the Ardmore Chronicle. Click to link to copies in Falvey’s Digital Library.

The Ardmore project proved to be a valuable experience for the students. Besides being introduced to multiple ways of finding primary sources, the students learned practical things, such as how to talk in a professional manner; how to manage their time; how to do research when book bags, pens, etc. are banned from the archives; and how to solve problems as a group. Dr. Bailey noted that instead of the project being a “cloistered” one, it brought students out into the surrounding communities and allowed them to make valuable connections.

Article by Laura Hutelmyer, photography coordinator for the Communication and Service Promotion team and special acquisitions coordinator in Resource Management.

Images courtesy of the Digital Library