Fathers and Sons of the American Navy

The Digital Library at Villanova continues to digitize and transcribe the Barry-Hayes Papers, owned by the Independence Seaport Museum. The papers remind us that in the 19th century, sons often followed their fathers into a certain line of work. The collection has many letters written by the relatives of Commodore John Barry, considered a “father of the American Navy”, that discuss the naval and merchant careers of the sons of Revolutionary War era naval officers. In “Letter, To: ‘My Dear Son’ From: Mother Elizabeth Hayes, February 21, 1815”, Elizabeth Keen Hayes, the daughter-in-law of John Barry, tells her son Thomas Hayes, a midshipman at Boston Navy Yard, about the injuries of Richard Dale Jr. Dale Jr. was the son of Richard Dale, one of the original commodores of the Continental Navy who had fought under the command of John Barry and John Paul Jones during the Revolutionary War. In January 1815, serving aboard the U.S.S. President in the War of 1812, the British took him prisoner after he was struck by a cannonball in a sea battle off the coast of Bermuda. Elizabeth Hayes has received news from Richard Dale that Dale Jr. has been injured, but still hopes for his recovery: “the report is that is most relyd on he has lost his leg his father is in some respects prepared for it but his mother flatters herself it is not so. I pray sincerely it may only prove a slight wound, the day the President was captured Richard was twenty years old”. Hayes also discusses a letter from Stephen Decatur Jr. to Mrs. Dale describing her son’s injuries. Decatur Jr. was a celebrated naval commander in the Barbary Wars, the Quasi-War with France, and the War of 1812, and his own father was a naval officer who had fought in the Revolutionary War. Hayes reports that “Mr Dale wounded and doing well was all Decatur said respecting Richard”. 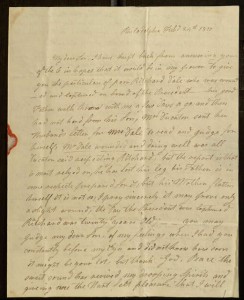 The letter gives an interesting glimpse into the generational influence of naval warfare, the pace of communication in 1815, and the anxiety felt by a mother over her son’s work. The letter has references to three descendants of Revolutionary War era naval officers; Thomas Hayes, Richard Dale Jr., and Stephen Decatur Jr. Elizabeth Hayes can only speculate about the injuries of Richard Dale Jr. and must wait for more information. She expects that Dale’s mother will not admit the severity of her son’s injury, but his father is more prepared to accept bad news. Elizabeth Hayes also expresses worry about Thomas coming to harm in the war as a midshipman. She writes “you may judge my dear son of my feelings when I had you constantly before my eyes and did not know how soon it might be your lot, but thank God, Peace the sweet sound has revived my drooping spirits and giving me the hart felt pleasure that I will see my see my son again ere long”. The Treaty of Ghent, ending the War of 1812, was signed in December 1814, but it was ratified in Washington only days before Hayes sent the letter to her son. In the time the Treaty of Ghent reached Washington, Richard Dale Jr.’s injuries worsened and he died in captivity in Bermuda. 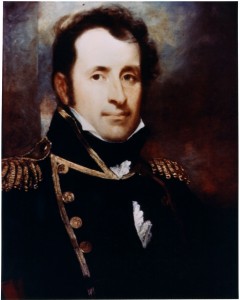 Find out more about the collection in the Barry-Hayes Papers finding aid, developed by the Independence Seaport Museum.