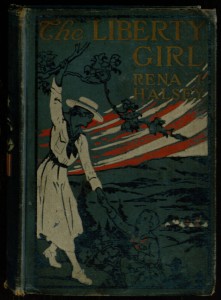 A few months ago, we helped produce an eBook of The Brighton Boys in the Trenches, an interesting example of the fiction marketed to boys during the first World War. Our latest release, The Liberty Girl by Rena I. Halsey, complements this as a specimen of Great War fiction intended for reading by girls.

Released in 1919, it seems likely that this was written during the war under the assumption that the conflict would still be raging upon its publication. The book continues the narrative of Nathalie Page, a character introduced in the non-war-themed Blue Robin, the Girl Pioneer. Nathalie begins the book with mixed feelings about the war, and several other characters are also critical of the conflict — offering slightly more moral shading than one might expect here — but the story is clearly designed to convince the reader of the justice of the cause, and everyone finds significant patriotic fervor by the end of the tale.

Obviously, a key distinction between Brighton Boys and Liberty Girl is that the boys were able to enlist and fight the battle directly, while Nathalie can only offer support from the home front. In spite of that limitation, the book is not solely about domestic activities; there are discussions of girls going overseas to support the troops, and some gruesome battlefield narratives are offered by way of a character returned from the front.

Of interest to dime novel readers is the fact that author Rena I. Halsey is the daughter Harlan P. Halsey, also known as “Old Sleuth,” a prolific dime novelist. The use of coincidence and disguise in the narrative here betrays at least traces of the Halsey family’s dime novel roots.

If you wish to read the book for yourself, it can be found at Project Gutenberg, where you can view the text online or download it in a variety of popular electronic formats.