The 2014 Winter Olympic Games began last week in Sochi, Russia, amidst swirling accusations of corruption, human rights violations and inadequate facilities, to name just a few. To help us get to the bottom of these issues and more, research librarian and liaison to the Department of Political Science, Merrill Stein, has compiled links and information on all things Sochi. 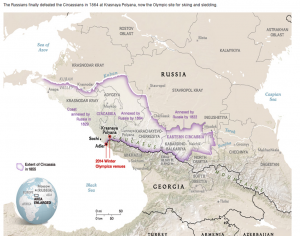 Sochi is a popular resort city with a warm climate, mineral springs and mountain scenery located (lat: 43 35 00 N, long: 039 46 00 E) on the Black Sea coast near the foot of Caucasus range. Occupying the site of the former fort of Navaginskoye, according to the Getty Thesaurus, the city combines “ … officials say, the natural attractions of both France’s Cannes and Davos in Switzerland (Financial Times, Grost, 2012, Nov. 2). “Not since Stalin favored Sochi as the sunny retreat of the Soviet elite has so much been done to remake the city’s landscape” (Putin’s Olympic Fever Dream – NYT Magazine).

Once described as the  [Leonid] Brezhnev “Camp David,” Sochi has been the site for many important Russian and international political meetings and summits. 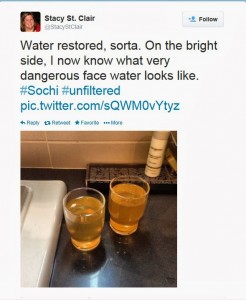 “Russia has built two venues for the Sochi Winter Games from scratch. An area of swamp on the city’s western seaboard that was once a haven for wild duck now encloses a 256 hectare Olympic park that will host the ice sports competitions, including speed skating, ice hockey and curling. Snow events such as ski jump, bobsledding and luge will take place at the sprawling Krasnaya Polyana mountain resort above the city where the tallest peaks reach 2,050m above sea level. Tourists will be whisked between the two areas by a new 40km mountain road or by a railway being built on stilts to avoid polluting the Mzytma river valley.” (Financial Times, Grost, 2012, Nov. 2).

Business Insider asks: Why is Sochi so expensive?

In all respects, Soviet tourism was communal as opposed to being individual or family oriented. When a Soviet citizen visited a resort in Sochi on the Black Sea, he or she was often in the company of fellow workers from his or her factory or collective farm. And while tourism was primarily domestic (due to the strict security concerns of the Soviet government), international tourism grew throughout the post-WWII period, reaching its apex in the 1980s (Hall, 1991). Most of these were inter-bloc visitors coming from East Europe. Outbound international tourism remained minimal during the entire Soviet period, specifically because private travel abroad was almost never granted and most citizens did not have the financial means to travel to the majority of foreign destinations. (University of Texas, Perry-Castañeda Map Collection)

In advance of the 2014 Winter Olympics in Sochi, the recent bombings cast doubt on Russia’s ability to provide the level of security required for the games. In February a Chechen terrorist group reportedly claimed responsibility for the attack, as several more suicide bombings occurred that month.

Robert Bruce Ware has a new book on the Caucasus and Russia: The Fire Below, available in the library collection now.

Introduction by Corey Waite Arnold, writer and intern on the Communication and Service Promotion team. Arnold is currently pursuing an MA in English at Villanova University.

Article, sources and links by Merrill Stein, librarian and liaison to the Department of Political Science.

Our new Dig Deeper series features curated links to Falvey Memorial Library resources that allow you to enhance your knowledge and enjoyment of seasonal occasions and events held here at the Library. Don’t hesitate to ‘ask us!’ if you’d like to take the excavation even further. And visit our Events listings for more exciting upcoming speakers, lectures and workshops!