Dig Deeper: Novelist David Gilbert on Being a Father and a Son 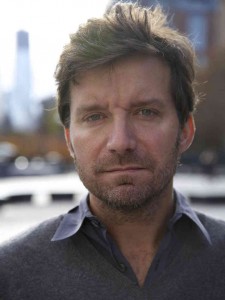 The 16th Annual Villanova Literary Festival opens this Thursday, Jan. 30 at 7 p.m. with fiction writer David Gilbert, who will be reading excerpts from his acclaimed novel & Sons. Mr. Gilbert’s stories have appeared in The New Yorker, Harper’s, GQ, and Bomb. His newest novel tells a sprawling tale of fathers and sons featuring two generations of writers and artists in orbit of a reclusive, Salinger-esque novelist named A.N. Dyer. A reception and book signing will follow the reading, along with the opportunity to meet Mr. Gilbert.

In preparation for the reading, we’ve compiled a list of resources to help our readers better understand the work of this fascinating young novelist.

In this Fresh Air interview, Terry Gross asks Mr. Gilbert about his life and upbringing as a way of better understanding the characters in & Sons. The author remarks upon his writing process, the difficulty of finding a voice and subject matter as a young writer, and the role Central Park played in the upbringing of an affluent Manhattan kid during the 1970’s and 80’s.

Speaking with Jonathan Lee at Guernica, Mr. Gilbert dives deeper into the nuts and bolts of & Sons, speaking on the novel’s tone, characters and form. In describing his decision to invent the entire fictional oeuvre of his character A.N. Dyer, Gilbert remarks that: “Since this is a book about books, and writing, I wanted it to contain every other kind of book within its pages. To have the satire, and to have the family drama, and suddenly have an Alice Munro style short story pop up. There’s even a bit of science fiction in there. I was just trying to throw between those covers as much as possible in terms of what a book can do.”

Emma Brockes praises the ambition and narration of & Sons in this article at the Guardian. She also calls attention to one of the novel’s strongest sentences, and Mr. Gilbert’s favorite: “Fathers start as gods and end as myths and in between whatever human form they take can be calamitous for their sons.”

Article by Corey Waite Arnold, writer and intern on the Communication and Service Promotion team. Arnold is currently pursuing an MA in English at Villanova University.

Our new Dig Deeper series features curated links to Falvey Memorial Library resources that allow you to enhance your knowledge and enjoyment of seasonal occasions and events held here at the Library. Don’t hesitate to ‘ask us!’ if you’d like to take the excavation even further. And visit our Events listings for more exciting upcoming speakers, lectures and workshops!