eBook available: The Ocean Wireless Boys on the Pacific 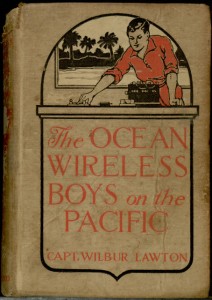 One of our recent proofreading projects has been turned into a finished eBook in record time thanks to the enthusiasm of Distributed Proofreaders volunteers.

The latest completed title is The Ocean Wireless Boys on the Pacific, part of a series of adventures involving teenaged radio operators. This particular story, the fifth in the series, has the Ocean Wireless Boys helping their millionaire employer find his lost brother, a famous explorer who disappeared in search of a fabulous pearl. The quest leads them into exotic settings where they encounter dangerous flora and fauna, unusual people, and a few old enemies from prior stories.

Like our earlier project, The Brighton Boys in the Trenches, this book is a time capsule of attitudes from nearly a century ago, showing what publishers thought boys wanted to read at the time of the Great War. It demonstrates the increasing commercialization of fiction through some very heavy-handed attempts to sell prior volumes from within the text of the story, and it also shows the pervasive casual racism of the era even while it sometimes seems to be attempting positive portrayals of people from other cultures.

Dime novel enthusiasts might also be interested to know that this is one of the few boys’ series books to also be published in dime novel “thickbook” format, as part of the Circling the Globe Library.

The full text, along with a couple of other Ocean Wireless Boys adventures, can be found at Project Gutenberg, where it can be read online or downloaded in a variety of popular formats.