What Did President Lincoln Have To Do with Thanksgiving? 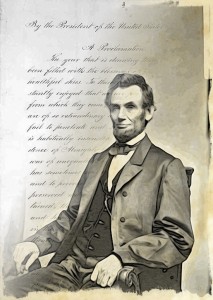 The 150th anniversary of President Lincoln’s Gettysburg Address—Nov. 19, 2013—has deservedly received a great deal of attention. That indelible speech reveals not only the humble heart of an influential leader but also his vision of what our country was and could become. Yet 2013 also marks another sesquicentennial: President Lincoln’s Oct. 3, 1863 proclamation “to set apart and observe the last Thursday of November next, as a day of Thanksgiving,” making Thanksgiving a national holiday.

Americans did celebrate Thanksgiving prior to Lincoln’s proclamation, but each state chose its own date for this day of gratitude. In fact, President Washington had issued a Thanksgiving Proclamation of his own on Oct. 3, 1789—exactly 74 years before Lincoln’s—that “the People of these States … may then all unite in rendering unto [God] our sincere and humble thanks.”

But Lincoln’s proclamation established Thanksgiving as an occasion for the entire nation to give thanks together, on the same day:

“I do therefore invite my fellow citizens in every part of the United States, and also those who are at sea and those who are sojourning in foreign lands, to set apart and observe the last Thursday of November next, as a day of Thanksgiving and Praise to our beneficent Father who dwelleth in the Heavens.”

Our first Republican president contributed his proclamation two years into the Civil War, three months after the Battle of Gettysburg and just weeks before delivering his Gettysburg Address. President Lincoln’s Thanksgiving proclamation serves as an example of his efforts to unite the people of our nation.