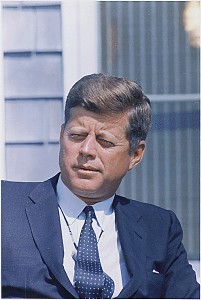 November 22 marks the 50th anniversary of President John F. Kennedy’s (JFK’s) assassination in Dallas, Texas in 1963. Kennedy, the 35th president of the United States, was travelling by motorcade with First Lady Jacqueline Kennedy that fateful day, campaigning for the next presidential election, when he was shot and killed. Many Americans believe this tragic event changed America forever.

During his brief time in office, JFK was a monumental force in promoting the change of the social and political landscape of America. He helped to raise minimum wage, create the Peace Corps, aid the Civil Rights Movement, improve Social Security benefits and even build support for the space program’s mission of landing on the moon—a dream that would eventually come to fruition in 1969. Most notably, perhaps, JFK played a vital role in peacefully ending the Cuban Missile Crisis, avoiding what could have been a devastating nuclear war with the Soviet Union. His famous call to all Americans during his inaugural address, “Ask not what your country can do for you, but ask what you can do for your country,” was the main motivating force of his presidency. He lived for public service and encouraged all Americans to do the same in order to contribute to the greater good. He gave us hope that things could change for the better.

Millions of Americans and people from all over the world mourned the loss of JFK in 1963, and many are still fascinated with him to this day. Why are we still captivated by a man who has long since gone? Kennedy served as president for just under three years, but in that short amount of time he made quite an impact. In addition to his political work, JFK was also greatly admired for his roles as husband and father to his two small children, Caroline and John Jr. The First Family was often in the public eye, especially as televised news increased in popularity, which helped many connect with JFK on a deeper level. The American public found him easy to relate to when they saw him playing these common, everyday roles. Images of his children playing in the White House Oval Office and similar warm family moments have become icons and an illuminative window into a simpler time in America. Through his youth and charisma, it seems as though JFK was able to give the White House a newfound warmth and vibrancy that it had never quite had before. Perhaps that is part of what keeps us interested in him—his death represents a loss of innocence during what was thought to be a time of hope and transformation.

Although JFK’s popularity has endured throughout the years, current college students may be curious about what he truly symbolized to American public at the time and why he is sometimes still analyzed in the media to this day. Not to fear! Falvey Memorial Library’s political science research expert, Merrill Stein, has assembled library resources to satisfy your curiosity and help you to Dig Deeper.

This Close to a Killer

The Truth About JFK and Vietnam: Why the Speculation is Wrong-Headed

The CIA & Congress : The Untold Story from Truman to Kennedy

The Other Missiles of October : Eisenhower, Kennedy, and the Jupiters

The Missile Crisis of October 1962 : A Review of Issues and References

The Road to Dallas: The Assassination of John F. Kennedy

Report of the Warren Commission on the Assassination of President Kennedy

The Missiles of October

Congress and the Nation

U.S. Government Bookstore (collection of the official Federal publications by and about President John F. Kennedy)

Information on of some of the many TV specials, movies and books that will be available around the anniversary of JFK’s death this month:

Research links provided by Merrill Stein, team leader of the Assessment team and liaison to the Department of Political Science.